I've put a fair few miles on Crimson Ghost since I got it, and there were a fair few miles put on before then too. As with all things in life, the tires were impermanent and only shared a short but fulfilling life with us.

To make a long story short, the knobs on the tires were starting to get chewed up, and it was compromising traction in certain circumstances.

I'd known this for a while, of course, which is why I'd been keeping an eye out for some sales. I managed to pick up a replacement front tire at a discount, but after waiting and waiting I only ever saw the rear at full price. Finally I had to admit that enough was enough, and since I was due for the quarterly sealant refresh this month, I just ponied up and bought the rear at full retail.

The bike had come with a Maxxis DHF in front and a Maxxis Aggressor in the rear. This is a fine all-purpose combination, but it tends to lean towards all-around performance in both wet and dry, whereas 100% of my riding is in the dry. As such, I opted to replace them with a Maxxis Dissector in the front, and a Maxxis Rekon in the rear. This tire pair is (supposedly) roughly equivalent in grip in dry conditions, while shedding a fair bit of weight and picking up some improvements in rolling resistance. 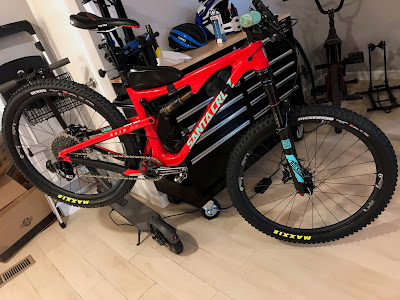 They don't look half bad neither.

As for the old tires, I decided that it'd be a good idea to keep them around as emergency spares, just in case I accidentally damage one of the new ones beyond repair and need something to tide me over while I wait for another sale. As such, I'm currently giving them a bath to wash the old sealant out of them. 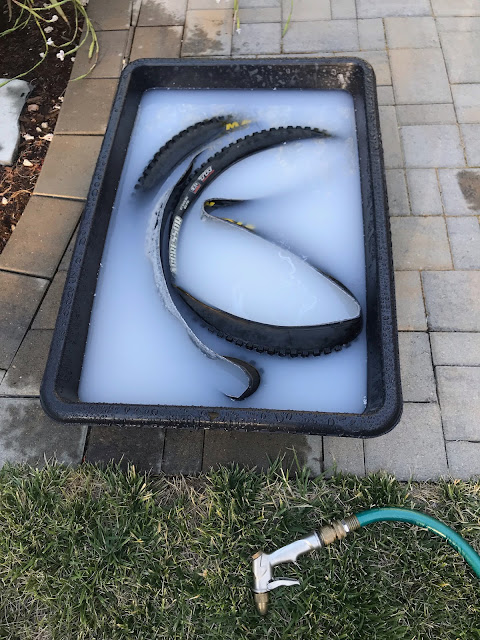 I think I'll give the new rubber a test run tomorrow morning around my XC loop. I usually ride Blackbirb for that since it's just flat, smooth dirt trails but it's also really close to home so if anything alarming happens with these tires it'll be a short walk back to fix things.