I Have the Power

In the immortal words of He-Man. 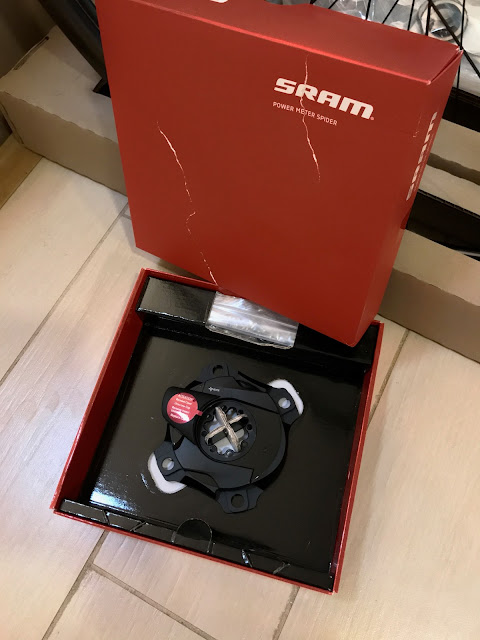 More bits for the new bike have arrived, this time the power meter spider. This fits in place of the direct mount chainring on SRAM Force or Red cranksets, and then you mount a chainring to it. As the name implies, it reports a live reading of how much power I'm putting through the pedals as I ride.

I didn't order the chainring just yet, though. The crankset I ordered came with a chainring (technically you're supposed to be able to get it without, but supply chains), in a rather large 46t size, and I want to get a few rides in to see how the gearing feels before I settle on what size to order to mount up here. There's a 99% chance I'll go with 42t, but there's no sense in being hasty.

Posted by Nicoya at 7:38 PM No comments:

On longer rides on BlackBirb, my XC bike, I've been having issues with lower back fatigue and a peculiar amount of chafing on my upper buttocks. I'm no bike fitting wizard, but my instincts tell me that my cranks are too long (170mm feels nice to me, but this one came with 175mm) and the reach is too long (I could plausibly fit either a small or a medium frame from this brand, and I ended up getting the medium).

At some point I'm planning to get a shorter set of cranks, but I'm also planning to do a number of other upgrades at the same time (switching to a 12-speed 10-50 cassette instead of the 11-speed 11-42, getting new wheels, adding a power meter, getting a new derailleur and shifter...) so that's a project for future-me. But shortening up the reach is pretty easy to do on its own.

For reference, this is the current set-up, which is stock from the factory. A 90mm +6° stem, which is quite long by MTB standards though not uncommon for XC bikes at the time. 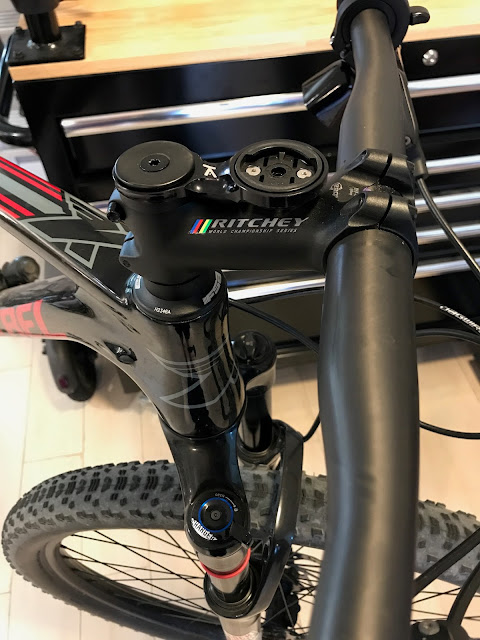 Having a longer stem is kind of nice when climbing because it puts your weight more over the front wheel, which helps keep it from lifting or washing out on really steep stuff. But if the total reach is too long, you just end up stretched out in an awkward position, which is no bueno.

So, I replaced it with a stem with more modern proportions: 40mm and 0°. 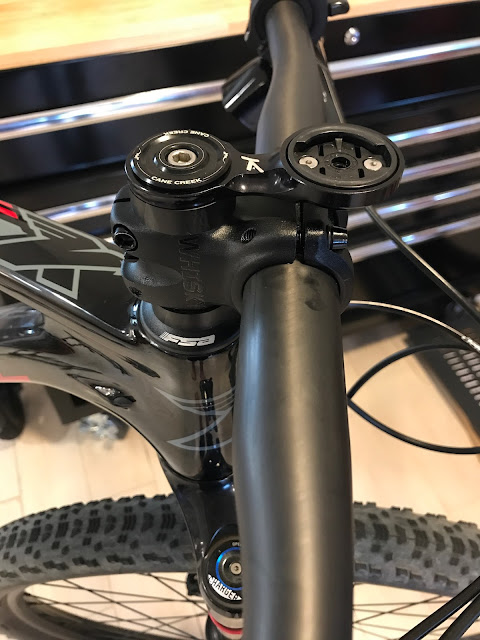 I took it for a quick spin around the block and honestly... it kinda feels the same? I'm not sure if I was expecting a really dramatic difference in handling or in how stretched out or compressed I felt in terms of reach, but people tend to make a big deal out of how much stem length affects these sorts of things. Apparently those people are all crazy.

This lack of difference is generally a good thing, though. I did like the way the bike handled before, so having that change dramatically would have been a disappointment. I'll need to go on a longer ride to see how the reduced reach impacts the lower back fatigue, but I'm hopeful for good things there.

But that's a project for another day.

Update: I decided that instead of waiting for more spacers, I'd just file down the top of the steerer a few mm. Now I can just run a 5mm spacer above the stem, with the garmin mount on top of that. 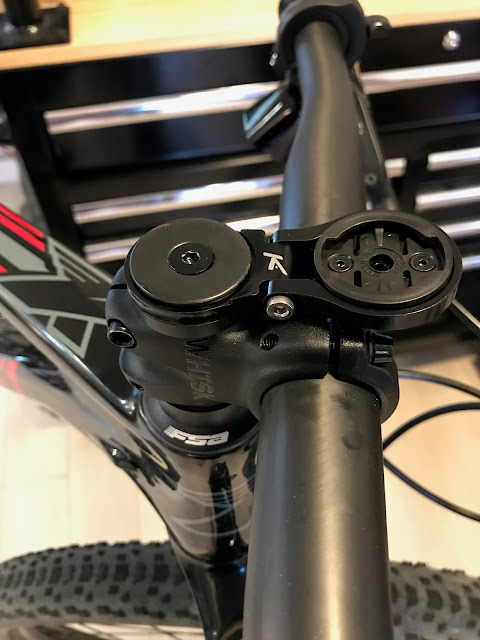 I also switched to the hinged garmin mount, as I needed just a tiny extra millimeter for it to not interfere with the front half of the stem. 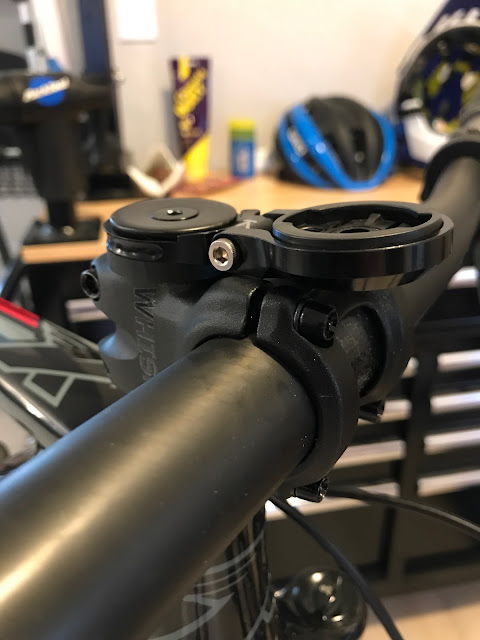 Thankfully I happened to have on in my drawer of spare parts, so everything worked out nicely in the end.

Posted by Nicoya at 7:32 PM No comments:

After some consideration, I decided that having a front wheel on the bike as well will probably help make the rides a bit less fatiguing. 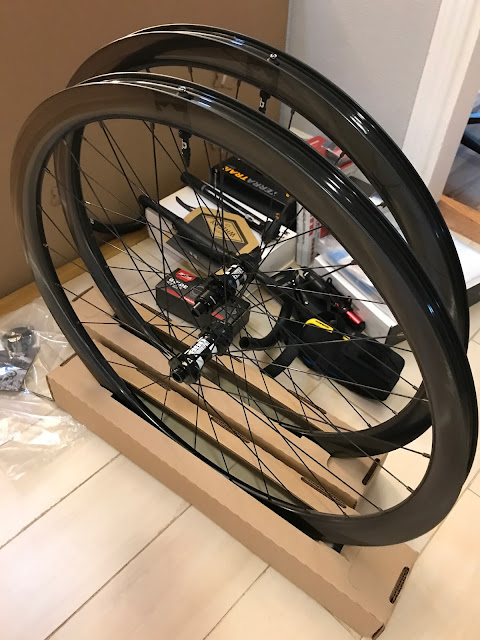 I'm still waiting on more, fairly vital parts, so we're not quite in the home stretch, but things are looking good. 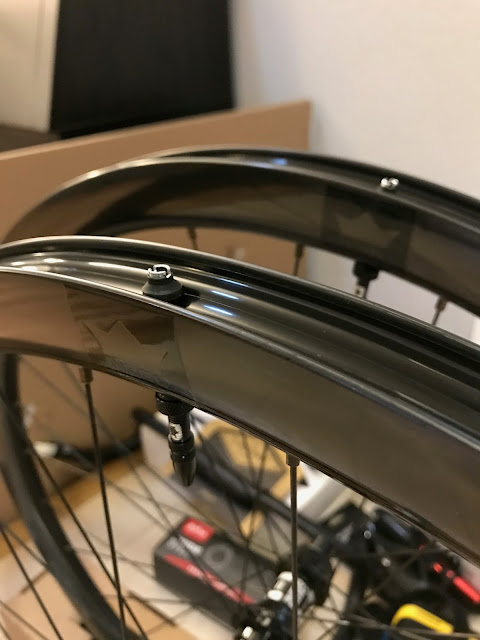 Posted by Nicoya at 6:51 PM No comments:

Well, I guess I've got almost enough bits to make a unicycle. 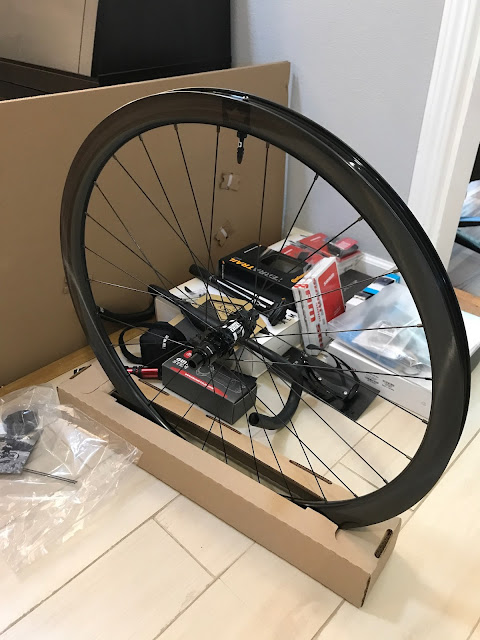 Who needs a front wheel anyway, you only use that when you're not doing dank whoolies. 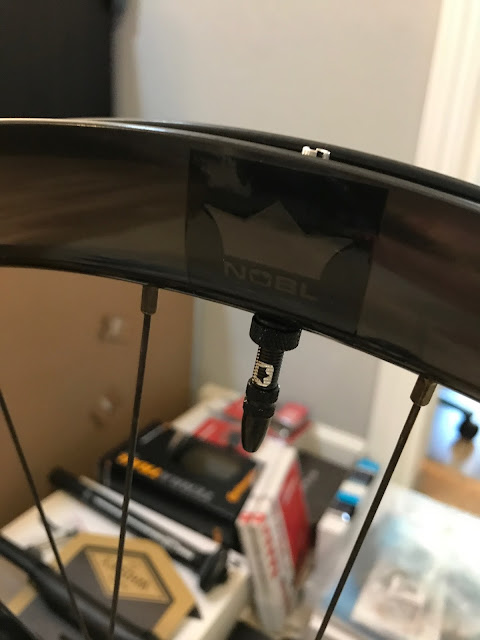 I have to say I'm really impressed with the finish on these Nobl wheels. So far I'd say they were well worth the money, especially given that the price was right in line with any other high end carbon wheels.

I just have to hope they hold up to the abuse I'll be giving them.

(And for those wondering: fear not, the front wheel should be arriving tomorrow)

Posted by Nicoya at 6:03 PM No comments:

Despite All My Rage

Apparently I got a little carried away putting my bottle back in the bottle cage on a ride last week. 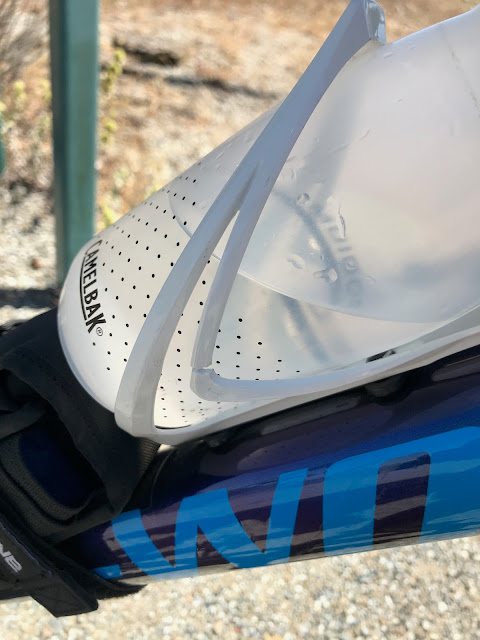 This is a Specialized Rib Cage II, which has in most regards treated me very well over the years. It holds the bottle securely, it's easy to get the bottle in and out, and of particular importance for this bike: it's white.

The white part is important, as this bike also has white bar tape. When putting together a colour combination for something like a bicycle, it's important that each colour is used in more than one place, so as to provide a sense of cohesiveness across the whole design. Without the white on the bottle cage, the bike just didn't look right.

The simple solution to this broken bottle conundrum would be, then, to simply purchase a new Specialized Rib Cage II in white.

But they don't sell it in white anymore. They only sell it in black with white (and other) accents, and that's not really good enough for my situation.

So, I decided to go in a different direction. 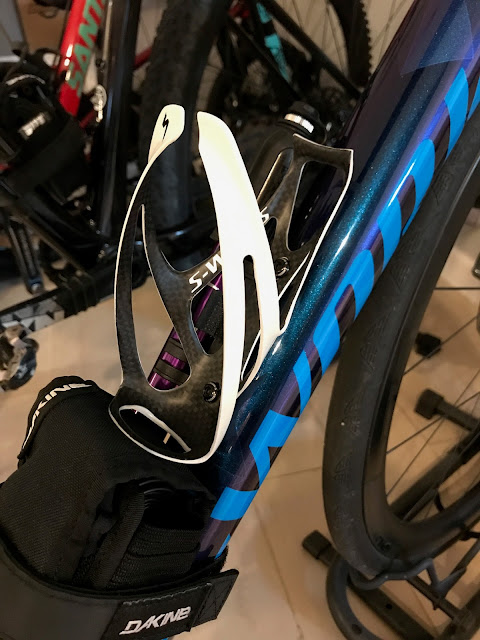 This is the Specialized Rib Cage III Carbon. Yes, a bottle cage made of carbon fiber. It's not quite all white, but it's got more white than the current lineup of Rib Cage II, so it'll have to do.

So far I've found it quite easy to use, though it feels like it might not grip the bottle quite as tightly as the Rib Cage II. That said, I haven't seen any signs of the bottle wanting to bounce out of it, so I'll come back to this point at some future date if that trend shows any signs of changing.

It does, thankfully, have enough white on it to pull the colour scheme together again, so that's nice at least. 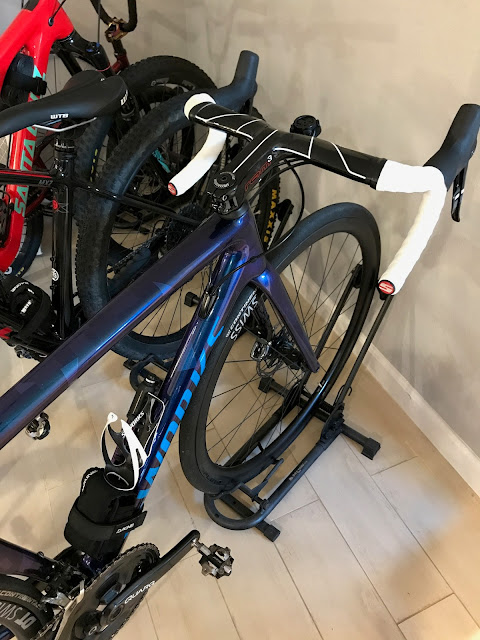 And yes, it does cost a silly amount of money. Silly in bottle cage terms, at least.

Posted by Nicoya at 9:47 PM No comments:

I can never drive my van another mile from where it sits right now, for it has achieved perfection. 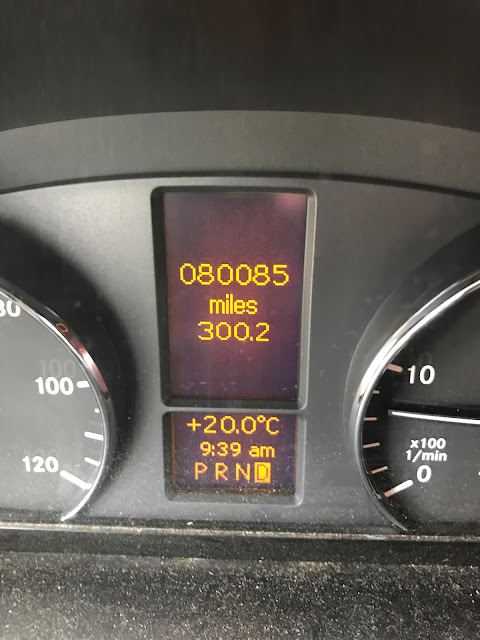 Truly a milestone worth celebration.

Posted by Nicoya at 6:34 PM No comments:

It's Just a Number

In exactly 5 miles I'm going to be a mature and responsible adult. 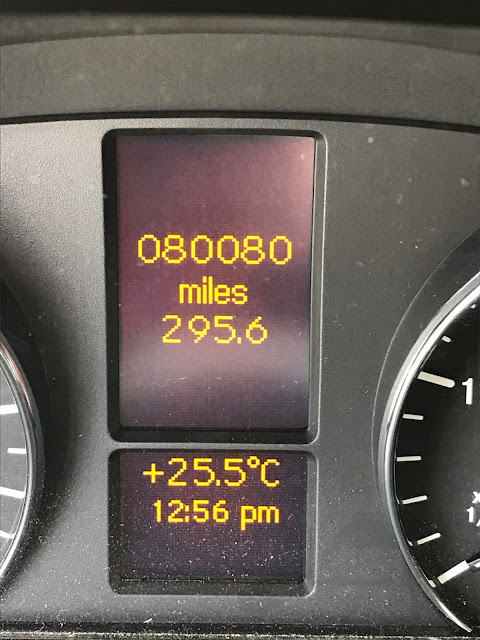 I should maybe clean off the dust too.

Posted by Nicoya at 7:42 AM No comments: