Time for another flower update. First up, the... whatever this is, I keep forgetting. 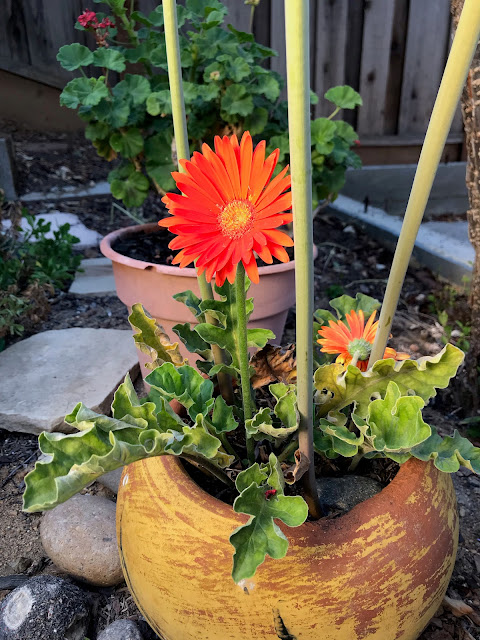 Orange thing. Whatever. It made a flower.

Next up, the echeveria with its absurdly long flower stalks. 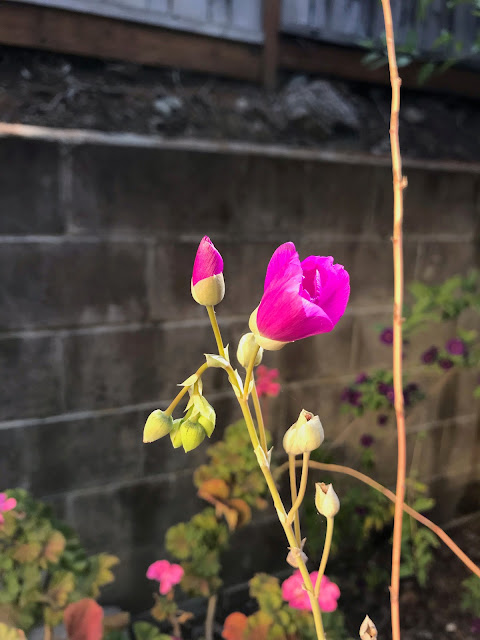 And the rose, doing its rosy thing. 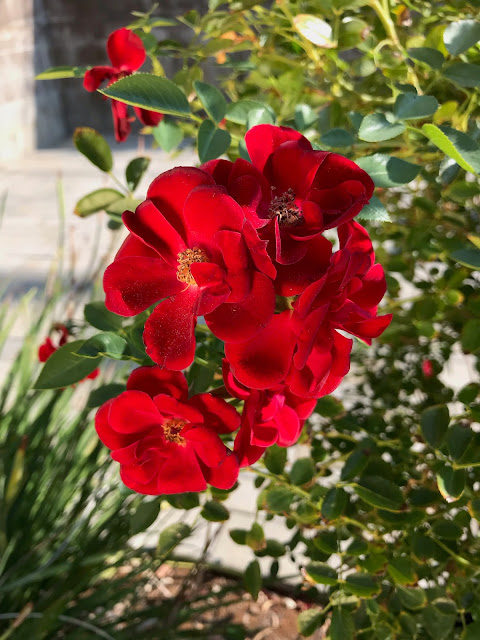 I'm sure that by any other name it would smell as sweet. 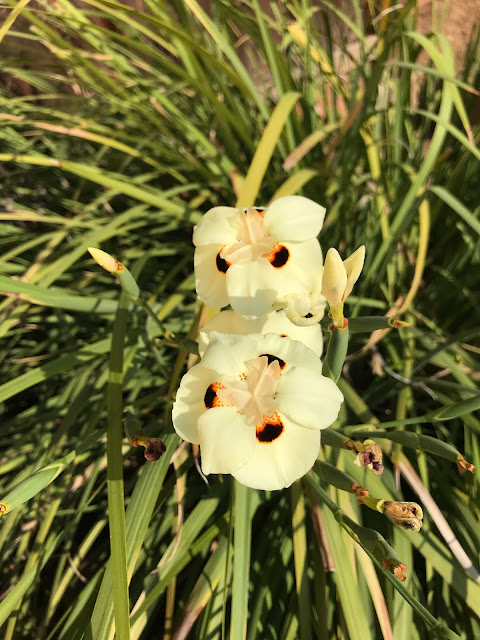 It needs a bit of deadheading. Ah well, a problem for future-me. 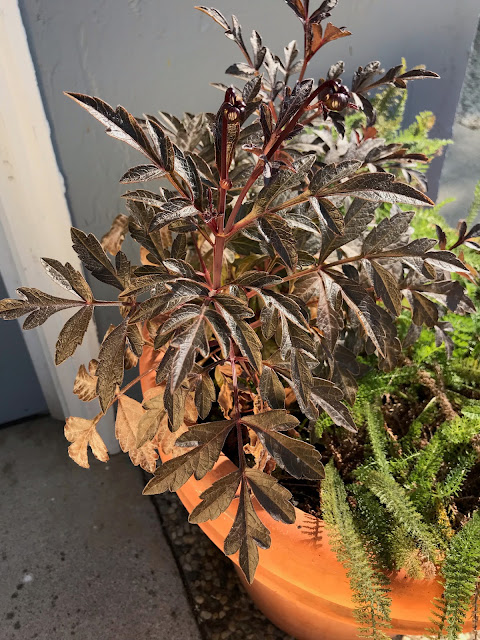 It'll be interesting to see what it looks like.

The mexican heather is recovering nicely from being planted. 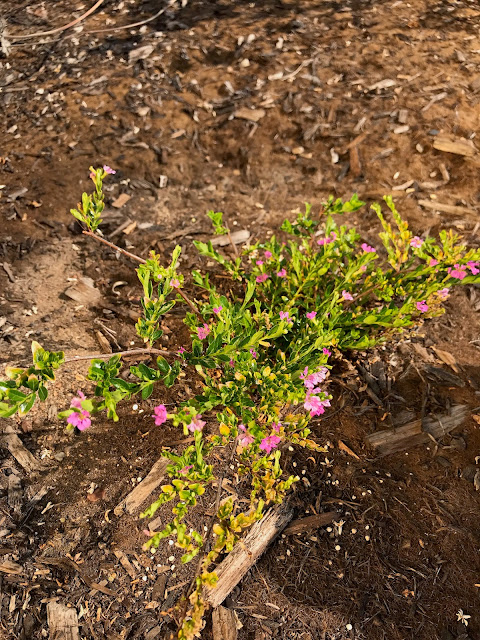 The succulents in the front are doing lovely as always. Can't remember what these ones are called. 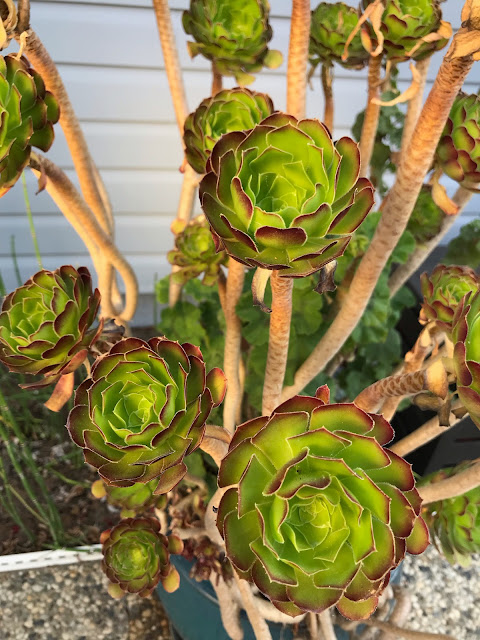 And if these photos are looking more delightful than usual, the reason is because I'm cheating. 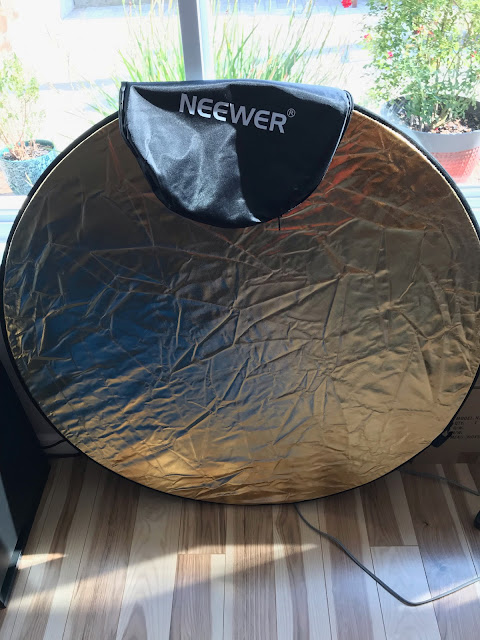 Finally went and got myself one of those pop-out reflectors. It's got a black side, a silver side, a gold side and a white side, along with a translucent core. I primarily used the gold side for these shots, to give a nice warm fill light. It really steps up the game.

Posted by Nicoya at 5:29 PM No comments:

I was finally running low on dish soap recently, and I came upon the usual dilemma: to purchase a new one-time-use package of dish soap cost a certain amount, and with nearly that same amount I could instead buy a refill of 2-4x the size.

So I decided to do the eco-friendly thing and buy a permanent dispenser and a bulk pack of soap, because why not.

The dispenser arrived yesterday, and it came with a little laser cut plywood hang-tag, looped to the neck of the bottle with a bit of twine string. Quaint and amusing. It was of course unlettered, as the end user was intended to write on it the description of the dispenser's contents. So naturally I popped the top off of one of my sharpie paint pens and... 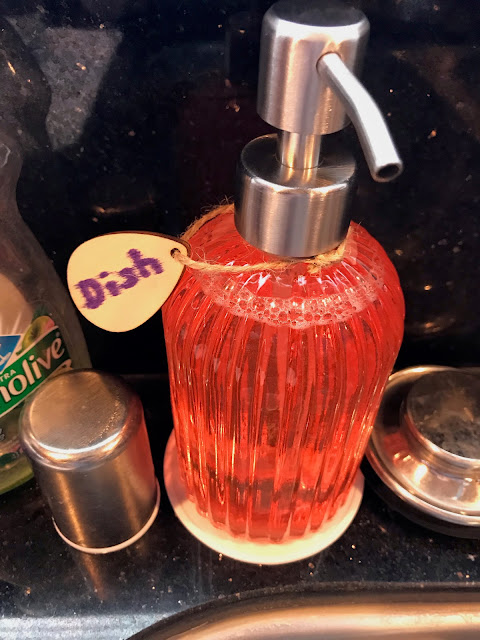 Well, that could have gone better. I suppose I should have expected the dyes to run when painted directly onto the unfinished plywood, but foresight was not on my side that day.

But when life gives you a droplet-shaped lemon, make avocados... or something like that. 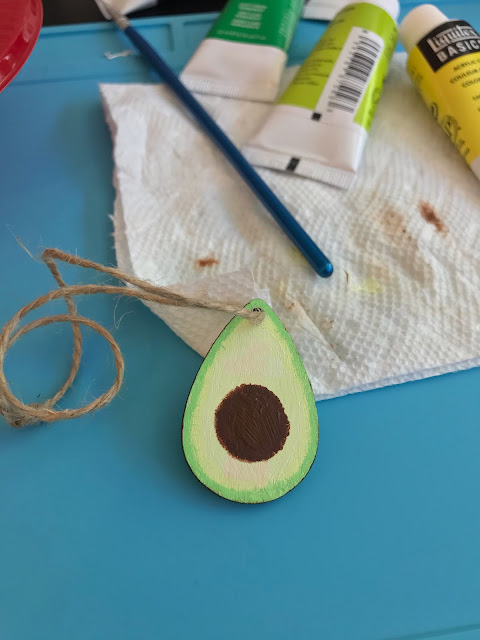 A few coats of titanium white mostly blotted out the sins soaked into the wood fibers, and some playful yellow-greens and browns gave it the appearance of an avocado.

Unfortunately, the unbridled power of titanium white was not quite sufficient to prevent one of the dyes from the paint marker from leeching up through the paint layers and leaving a little ghost of the past showing. Undeterred, I decided that I still wanted the dispenser to advertise that it contained dish soap, and not some sort of strange orange avocado extract, so I redid my lettering on top of the paint and acrylic varnish once it had all dried. 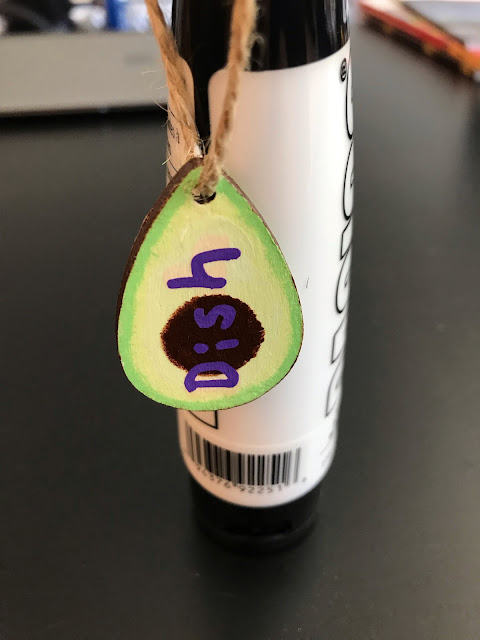 Much less bleeding this time. Delightful. 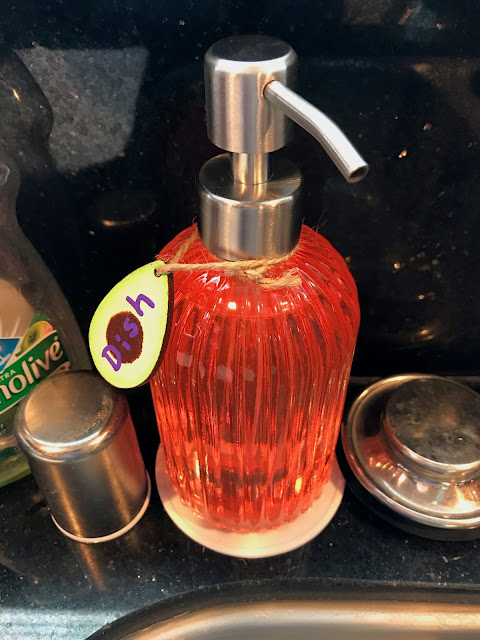 I'll go ahead and toot my own horn and say that I think this tag came out looking quite nice.

Posted by Nicoya at 4:25 PM No comments:

From Firsts to Lasts

I feel like one's autumn years are characterized by the point in your life when you stop noticing the 'firsts' in your life, and instead start noticing the 'lasts'. One goes from "this is the first time I drank an alcoholic beverage" to "this is the last time I get so drunk at the office party that I puke on the VP," and stuff like that.

Recently I had a 'last' come to me rather unexpectedly early. You see, when most people bust out a brand new disposable razor they expect it to last about a week, if the marketing on this box is anything to go by. 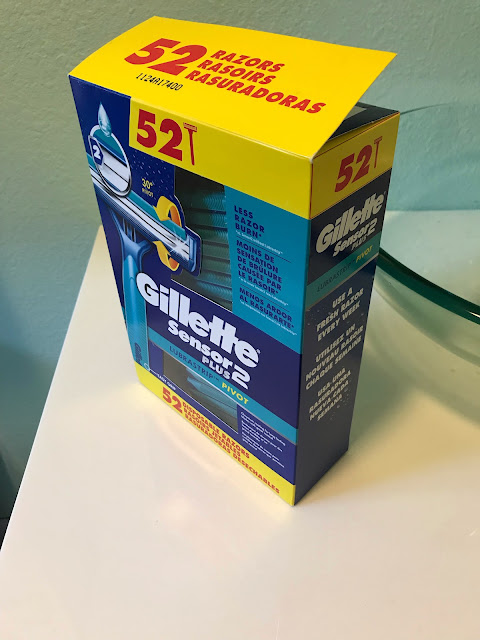 And they are, in this bulk format, inexpensive enough that you could easily go through one a week without compromising your household budget.

I, on the other hand, use them until they wear out. For me, this takes about a year, and they usually fail when some of the plastic around the blades starts cracking and falling apart rather than the blades themselves getting dull.

So I'm now the proud owner of a roughly 52-year supply of disposable razors.

I suppose when I hit the ripe old age of 94 I might have to reconsider my definition of "lifetime supply", but maybe when my supply starts dwindling I'll just see if I can squeeze a year and a half out of each razor.

Posted by Nicoya at 4:16 PM No comments:

How much pruning should I do?

Yes, this looks like about the right amount of pruning. 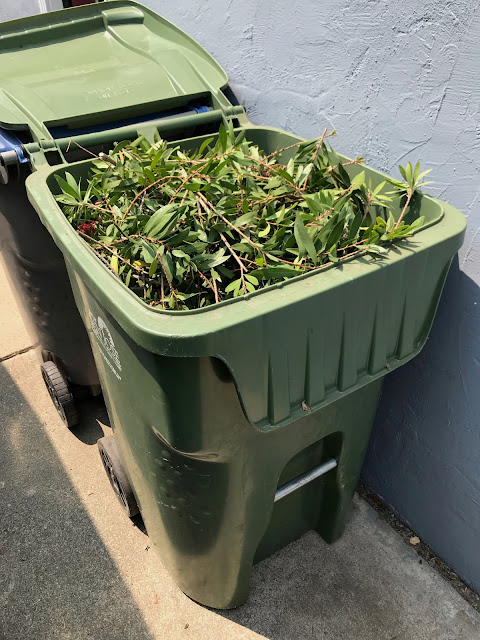 That should just about do it for the day.

Posted by Nicoya at 2:56 PM No comments:

So, basically ever since I moved in I've been somewhat disappointed with the performance of the drain in the ensuite bathroom. 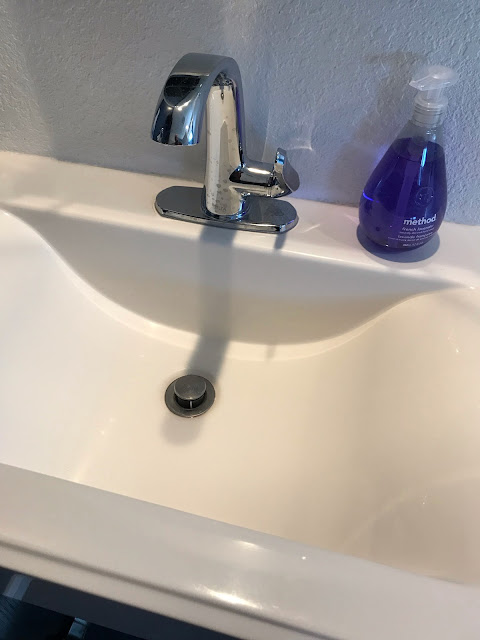 What's wrong with it, you ask? Well, let's just say that it's a wee bit difficult to operate. 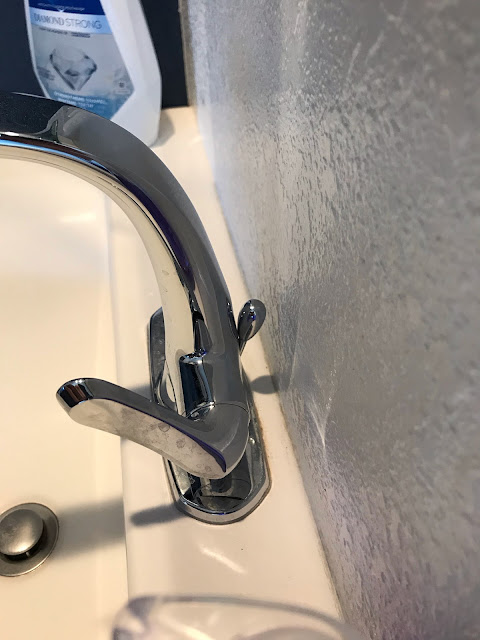 And by "difficult" I mean "basically impossible". This is not ideal.

Of course, we already know that plumbing was not exactly a strong point of the previous owner's handyman skills, but just to underline that fact, we see the obvious giveaway. 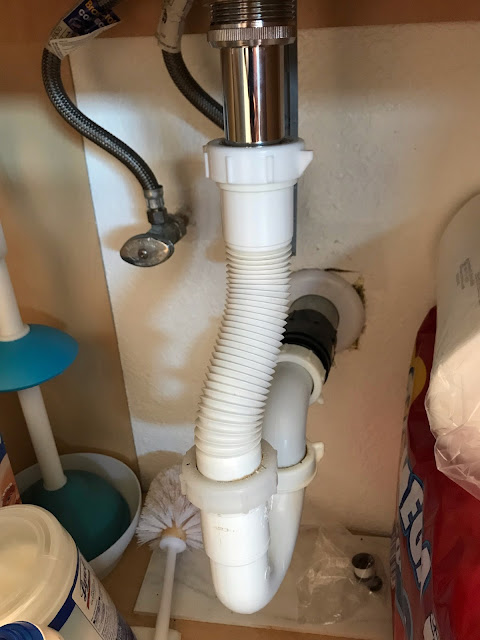 Any time you see one of those accordion style p-trap hookups, you're basically guaranteed to find horrors lurking somewhere.

I did not have to look far to find those horrors. First up, they used caulking under the rim of the drain rather than plumber's putty. Secondly, the caulking was literally pointless because they used an overflow-style drain on a non-overflow sink. Again. 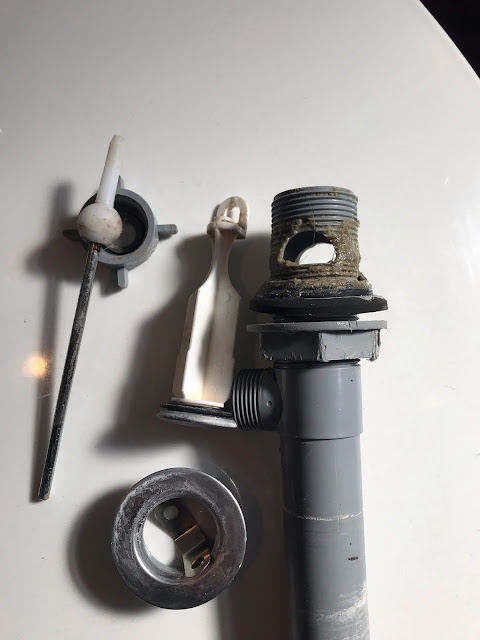 At least this time the skanky drain water wasn't soaking into the MDF top of the vanity, since the whole top of this one is porcelain instead, but still, what the fuck.

Anyway, installation of the new unit went nicely. This one is a push-up push-down clicky dealio which doesn't need the handle behind the faucet to operate it. 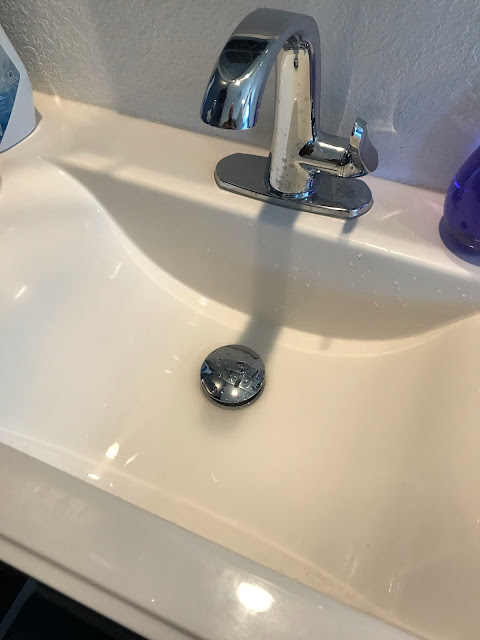 And would you look at that, it actually holds water. 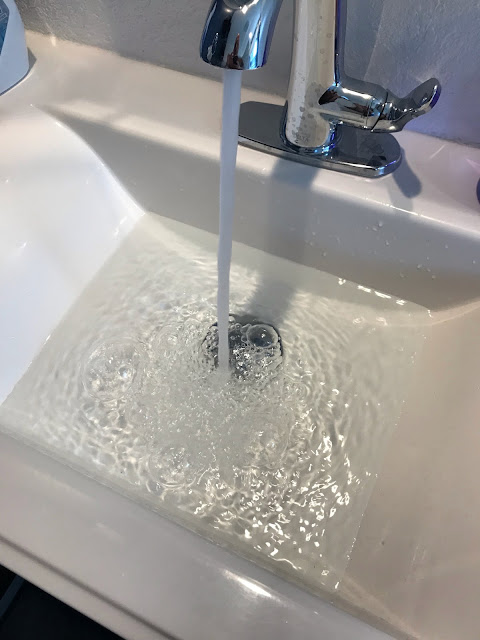 I'm pretty sure this is the first time that this sink has ever been filled since the day it was installed.

One minor downside is that the flange on the new drain sits slightly higher than its ideal location, so it leaves a tiny bit of standing water at the bottom of the sink. I don't entirely blame this on the new drain though, as this sink has a peculiar cylindrical profile, so it doesn't really drain well anyway. (It was actually a problem with the old drain too)

It's not really a bother, though, I'll just have to pay attention to keeping it clean.

Posted by Nicoya at 4:47 PM No comments:

Some amaryllis popped up recently. 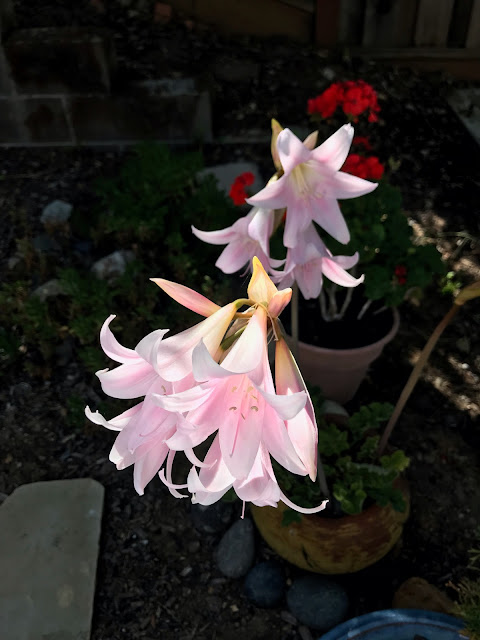 Posted by Nicoya at 4:12 PM No comments:

My dishwasher has a problem: it's made by Samsung.

In this particular case, that means that it suffers from a completely pointless and preventable malady: the vent fan that exhausts hot dishwasher air out of the tub at the end of the cycle is made out of a soft, easily heat-deformed plastic.

You can probably see where this is going.

At the end of the cycle, the fan spins up and draws steaming hot air over the plastic blades. Those blades soften and, thanks to the centrifugal force they splay outwards, buzzing against the fan enclosure.

So, out the old one comes. 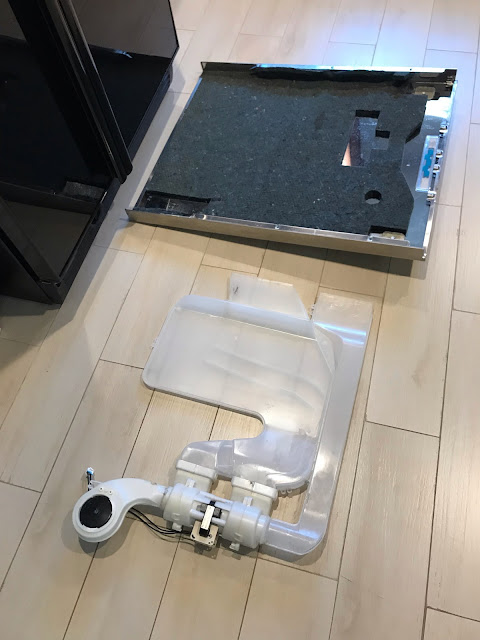 It's in relatively good condition, other than the part where it's completely broken. 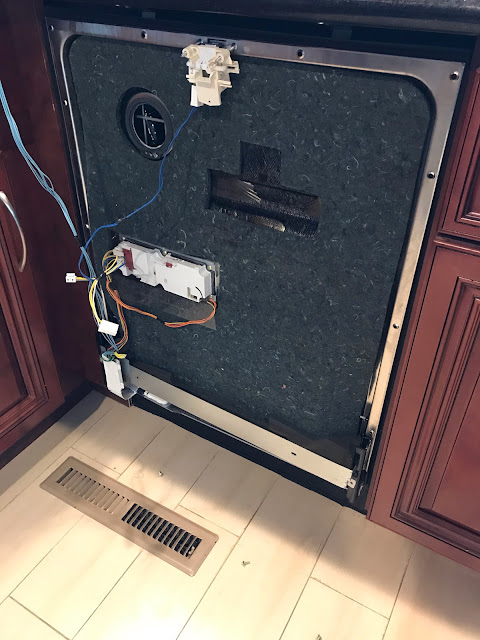 Anyway, it's thankfully an easy part to install, so in goes the new one. 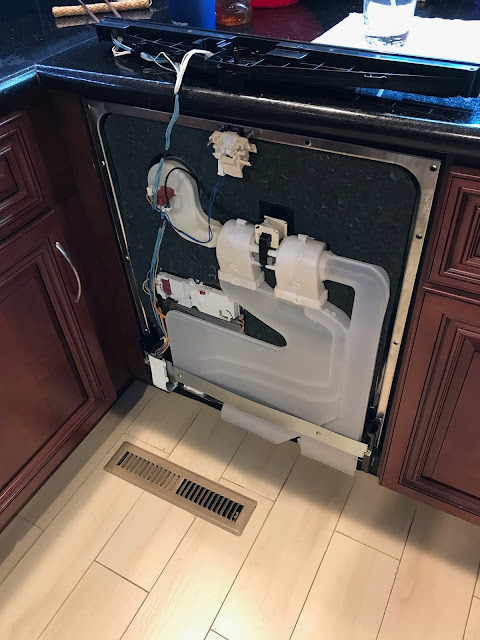 Yup, looks exactly the same as when I started.

I didn't take a picture of the whole door reassembled, because it just looks like... you know, a dishwasher.

Anyway, here's a shot of the warped fan blades. 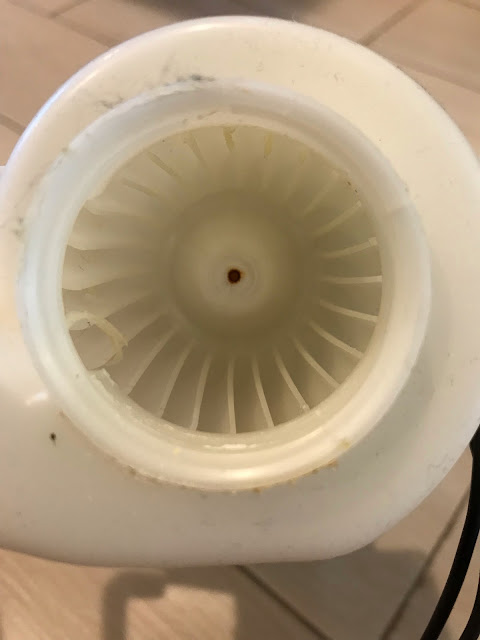 The perspective makes it a bit hard to parse, but there's some lighter discoloration around where the blades attach to the hub in the back, and the blades are bent slightly counterclockwise since they flex back at an angle.

Posted by Nicoya at 5:08 PM No comments:

I wonder why this wall wart lost its magic smoke

So halfway through doing my nails on Sunday evening, I had a rather inconvenient thing happen: the UV curing lamp, strictly necessary for curing my gel polish, just up and quit working. I pulled it apart to diagnose the issue and see if I could work around it to finish up my nails, and as it so happened the problem was an easy one to figure out: the wall wart had lost all its magic smoke.

Supplying 12v from my bench supply to the lamp restored its functionality. My nails were saved.

But that left a mystery: why would the wall wart just up and fail like that? Time for an investi- 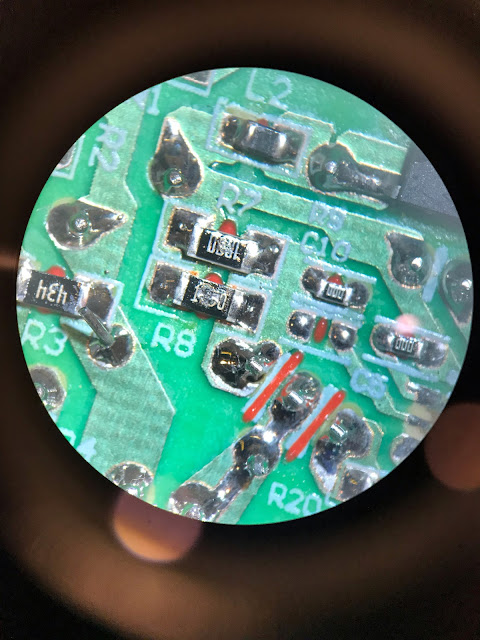 Ok, I may not be a board-certified resistrologist, but I'm pretty sure these two 1.5Ω resistors didn't come from the factory with speed holes in them. I would also venture to guess that measuring 60kΩ is not quite within their tolerance spec.

But then the question is: why did these resistors lose all their magic smoke? They're the current sense resistors connected to the drain of the switching mosfet, so the first likely answer is that the mosfet failed short, but if it did then it must have since failed open, because it was reading an open circuit between the source and drain (as it should, given there was no voltage present on the gate).

It's possible that the switching controller hooped itself and wedged the mosfet on long enough to pooch the resistors before the charge pump drained. The controller showed no signs that it was attempting to twiddle the mosfet gate, so that's a distinct possibility.

I could possibly see if I could identify and source a replacement switching controller, along with some 1.5Ω resistors (unluckily not a value I have in stock, at least not in 1206 SMD), but that's a lot of effort to spend on a $5 wall wart.

Instead, I think it will live out its days in my junk drawer, possibly to one day surrender some of its parts for other projects, or possibly one day I'll fix it just for fun. Who knows what the future holds. Going back into service as a wall wart, however, is out of the cards given that I had to destroy the plastic case to get at the PCB inside.

Posted by Nicoya at 5:00 PM No comments: