To the Ocean! Or not.

So on Saturday I decided I'd make another attempt to escape to the ocean. I failed. This time I saddled up on ANGRY BEES and headed up over Page Mill, down Alpine, with a thought to take Pescadero to get to the sea. 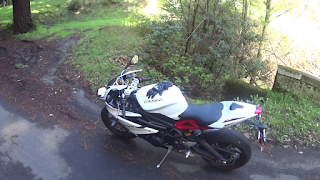 When I got to the top of Page Mill I started to get a bit concerned about how much gas I had left in the tank. I rolled out with half a tank and the bike was being a bit thirsty on the way up. Thankfully there's a gas station in Pescadaro itself so I wasn't too concerned. Pictured above is ANGRY BEES at the bottom of Alpine where it meets up with Pescadaro road. If you look really hard you can probably see the low fuel light on.

So I continued along Pescadaro road, thinking I was home free, up until about a mile out of town when I came upon a tiny little speedbump in my plans... 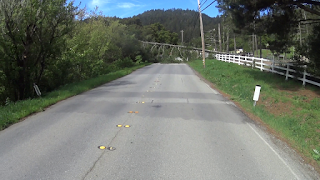 So you can see the issue. And sadly, there are no alternate routes around this rather unfortunate choke point. Like, none. Nada. Zip. Zero. Bupkis.

With no other reasonable option, I turn myself around and head up to La Honda, hoping to find a gas station there. Nope. Turns out I need to ride all the way up to Alice's to get gas, and luckily I had just enough fumes left in the tank to make it up there and pay Alice's somewhat premium prices for fuel. I mean it's only got a 4 gallon tank but it's the principle of it.

I had a nice ride back along Skyline and down 9, but I failed to reach the ocean once again. Que sera, I suppose.
Posted by Nicoya at 8:03 PM No comments:

I'm starting to think I should repurpose this blog as a travel blog of sorts, especially since I'm planning to ramp up my touring quite a bit once I get my new motorcycle this fall sometime. In that spirit, here's a short entry for today's travels...

I was feeling a bit of cabin fever on the way home from work today, riding Scooty-Puff Sr south on 85, so instead of taking a left on the Stevens Creek exit I decided to take a right with the thought of hopping over the hills to go see the ocean. You know, just look at it for a few minutes, then ride back home.

As it turned out, even though it was a balmy 20c down here in the valley, the air was quite a bit chillier as I rode up Stevens Canyon and Redwood Gulch, so I decided to make it a shorter ride and just go across Skyline to Page Mill to make a loop.

About part way up Highway 9 the traffic ground to a halt, and I split past the cars to the head of the line to see an accident had occurred, a perfectly aligned  head-on collision between a car and an SUV, with a sufficient impact force to origami-weld the two cars together. Thankfully the local authorities were quick to clean up the mess and I continued along my merry way. I considered snapping a photo, but I didn't know if that would be considered impolite?

Anyway, the ride across Skyline was delightful despite the somewhat wet and dirty roads. There were quite a few places where mudslides had encroached onto the pavement, though they'd been cleaned up sufficiently such that they weren't impeding traffic. I should mention that Stevens Creek was a whitewater torrent, and the Stevens Canyon Reservoir was nearly bursting its banks. Drought is over, everyone start wasting water again!

The ride did serve to remind me why I'm replacing Scooty-Puff Sr though, as my butt started to go numb for the last 15 minutes of the ~1hr ride.
Posted by Nicoya at 6:19 PM No comments: