Went on a little bike ride on Thursday. Decided to put some miles on Purple Haze and try out a stretch of road that a friend recommended to me. That road happened to be a good 30-ish miles away from me, so I made a sport of it and rode all the way there and back.

In all I spent 7:50 on the road, 6:15 of which was moving time. Not an amazing ratio but good enough to get the job done. When I rolled back in I was sitting at 89 miles, so I did a few loops around the neighbourhood to get a rounder number.

There were many lovely sights to see along the way. 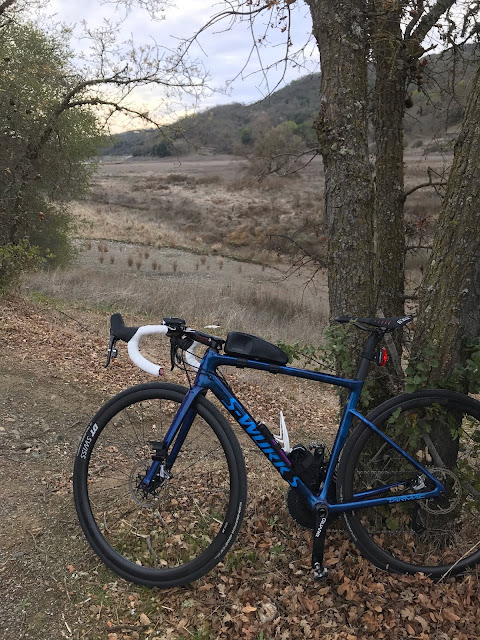 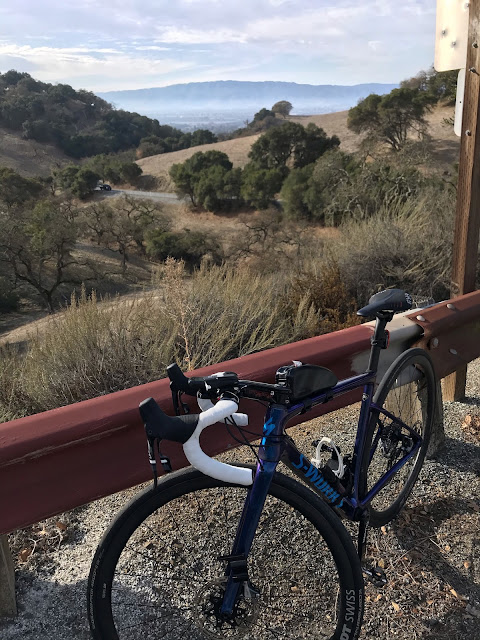 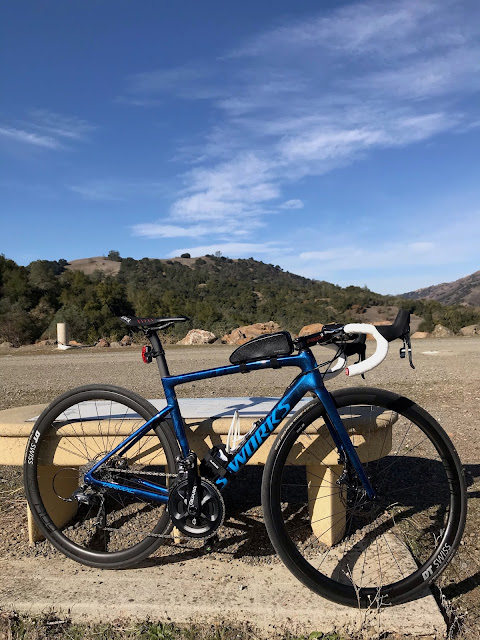 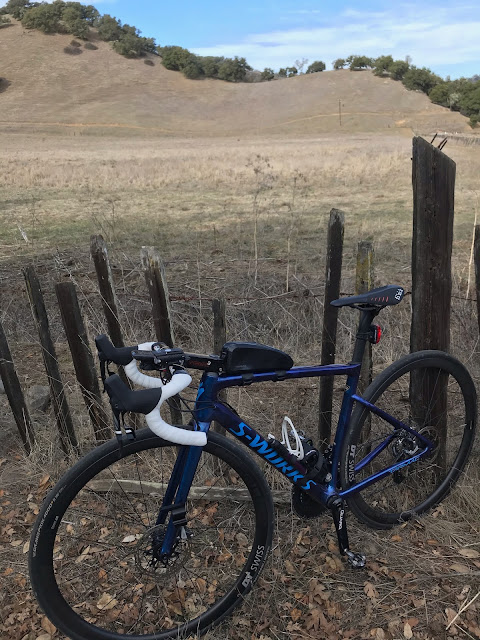 I had a bit of fuelling trouble near the end. At about hour 5 I started feeling a bit queasy every time I needed to shove more sugar down my throat (protein and fats don't do shit while you're in the middle of exercise), so I ended up tapering off for the last 2 hours. I didn't really run out of energy so I guess it wasn't too bad but not ideal.

As for recovery, I took it easy on Friday and had a little extra nap, but I didn't really feel any worse for wear. Bit tired and a little stiff here and there, but nothing particularly sore or cramped.

I probably won't do a lot of rides like this, unless I somehow gain even more fitness, but it's nice to try every now and then.

I Can See Clearly Now

So I bought a lemon. 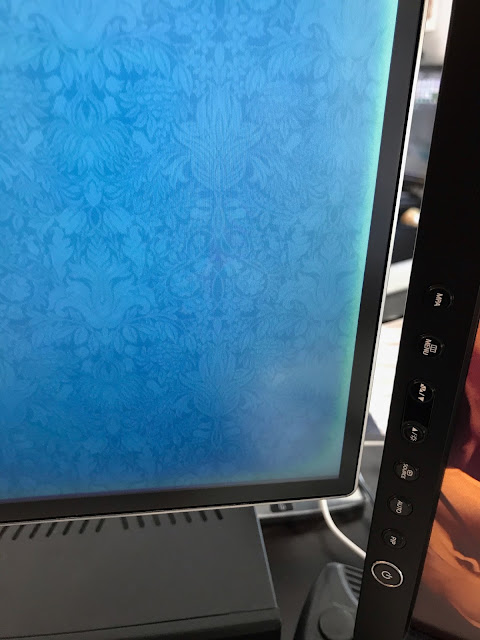 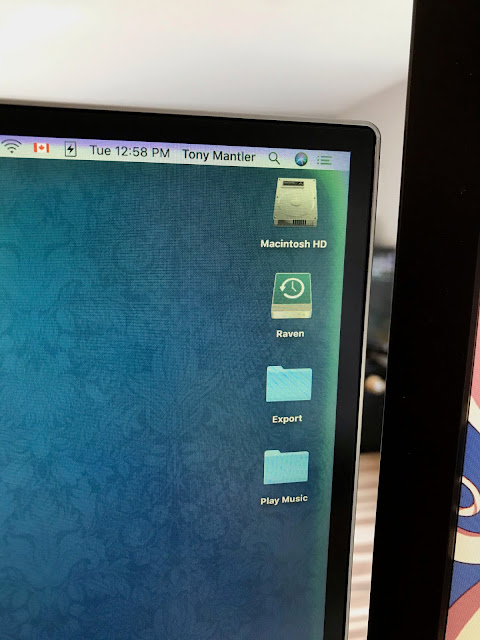 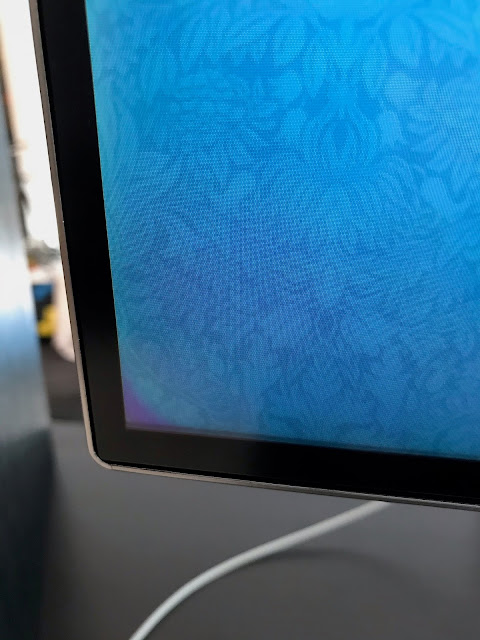 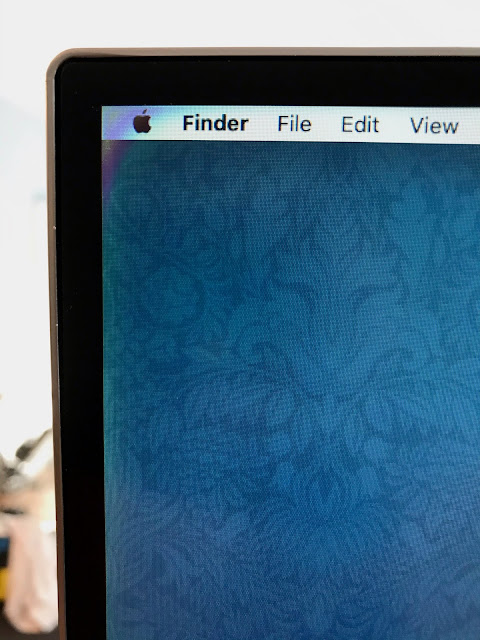 This purple and green and whatever mess in the corners of my monitor come courtesy of LG and their defective 32UD99-W display, and naturally just out of warranty. I've emailed their support drones in hopes of extracting some vengeance but I'm not holding my breath.

I've already replaced the monitor with a different model. Oddly enough, despite my best efforts, I landed on LG again. This is mostly due to the 32-ish inch 4k monitor scene being a bit sparse; most makers seem to be concentrating on making 27-inch panels for some reason. On the bright side the new one is a much cheaper model, the 32UL500-W, so if this one turns out to be a turd too I'll at least not have as big a hole in my wallet. 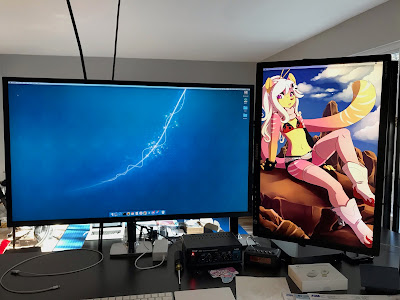 I took this picture before running it through a calibration with my colorimeter, not that you can tell in a photo or anything, but just figured I'd throw that out there. Naturally it took me longer to find the colorimeter than it did to run the calibration (not really, but it sure felt like it). Every few years when I get a new monitor I spend ages turning my house upside-down looking for the damn thing before remembering where its home is. Then after I use it I carefully put it back in its home so I can forget where it is for the next time I need it.

I'm not looking forward to trying to find it again when I buy my next monitor.

Posted by Nicoya at 4:39 PM No comments:

Putting A Stop To Things

I rode my bike up Mt Um last weekend and on the way down I had the opportunity to consider that my satisfaction with the performance of the brakes on Purple Haze was perhaps not as complete as I'd like it to be. I brought up this subject on the Google road biking group and one of the more technical members suggested that I might enjoy upgrading the brake pads to SwissStop brand pads instead of using the default SRAM pads that came with the brakes.

So, since pads are pretty cheap, I ordered a pair and dropped them in the front. I left the rears as-is because rear brakes don't really do a heck of a lot. 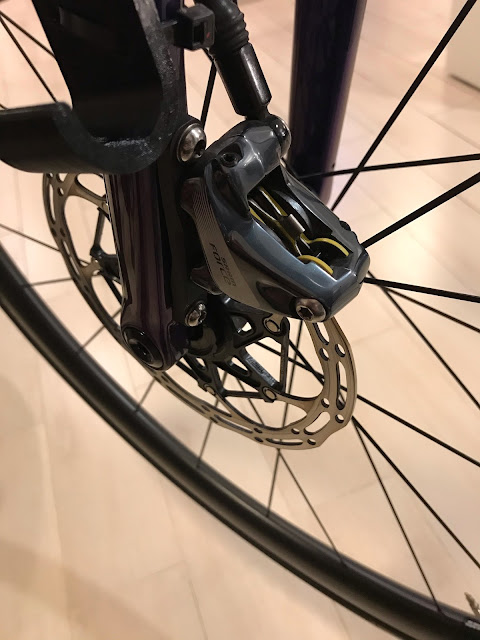 First up, they're a lovely yellow color, so I guess that's neat. As for braking performance; after bedding them in on one of the hills behind my house, I found that my impressions were really kind of unchanged. I'll keep them in there because there's no reason not to, but I think when they wear out (which might take a while, I've barely started to wear the original pads and these are supposed to last a lot longer) I might switch back to the SRAM pads I took out to see if I feel a dramatic difference.

In other Purple Haze news, I also felt that my on-bike nutrition situation needed improvement. I had stashed my energy chews in my jersey pocket (which is on the back for cycling jerseys), and given I was wearing thick winter gloves (ok, "winter" gloves. It's still California here), and wearing a jacket over top of the jersey, I found that accessing the chews on the bike was less than ideal. 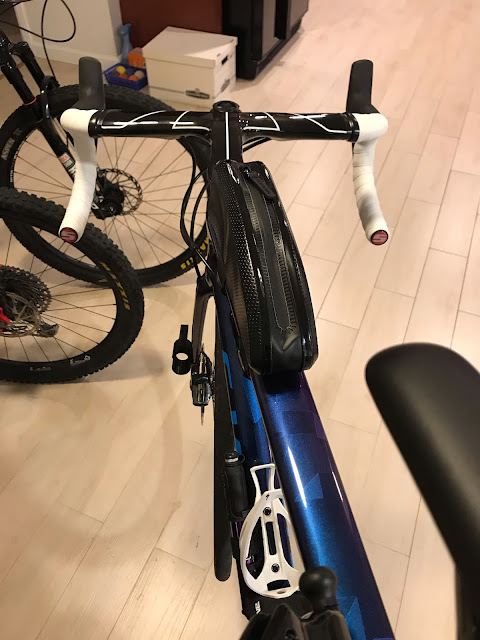 I actually have this same model bag on Crimson Ghost, though reversed and tucked under the seat to hold my multitool, pump, etc. This is more like how it's intended to be used, so we'll see how well it works out for me. I have high hopes for this one.

Posted by Nicoya at 7:36 PM No comments:

One of the downsides to rolling around the Google campus on my electric scooter is that it's quite difficult to carry anything while I'm on it. It really does need both hands to pilot it, so without some additional cargo accommodations doing something as simple as carrying my lunch from one of the food trucks to the eating location can be a curious challenge.

Not that I've had this problem lately, but I figured since I had the scooter at home for reasons we won't discuss right now I took the opportunity to basket it up. 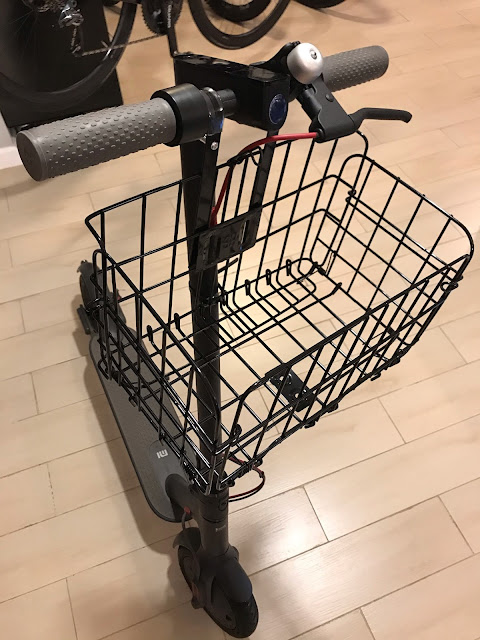 And when I don't need to carry anything, it folds up nicely out of the way. 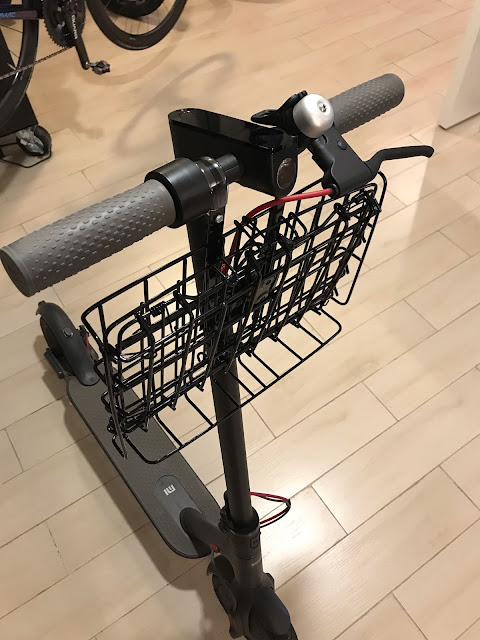 I think it will serve me well. Eventually. Maybe by this time next year I'll have a good idea of how well it's working out.

Posted by Nicoya at 7:28 PM No comments:

The last time I changed the oil in Gregg, my CB650F, was back in April. Of 2019. But given that not much riding happened between April of 2020 and now, I don't think that delaying the yearly oil change until now did much of any harm. 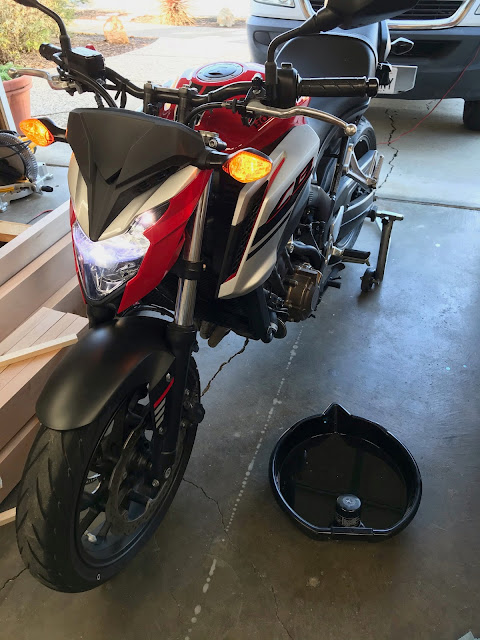 The process went smoothly and took maybe an hour from end to end all told. Very reasonable.

It's also about time to do a brake fluid flush, so I ordered up some bits and bobs for that and should be able to get that done over the xmas break too.

Posted by Nicoya at 7:24 PM No comments:

There's been much ado about Adventure Bikes over the past 10 or 20 years. Motorcycles that are designed to cover great stretches of pavement and dirt alike while carrying all your luggage and the kitchen sink. They are truly universal bikes.

But the truth is that any bike is an adventure bike, so long as you're having an adventure. In support of that point, on Friday I decided to take Scooty-Puff Sr on an adventure to scout out Mt Madonna road for a future bike ride.

Mt Madonna road is your standard "twisty bit of asphalt through the hills" for at least some of its length, but at a certain point when ascending from Redwood Retreat to Summit Road, it becomes somewhat less "asphalt" and quite a bit more "gravel". This also coincides with the point at which the landscape transitions from chaparral to a short stretch of oak forest before plunging into redwood forest.

And, for this trip in particular, also coincided almost exactly with sunset.

So it was that I found myself riding my motorcycle down a gravel road, with redwood trunks emerging from an abyss of darkness to my left to hold up a canopy of shadows against a patchwork of navy blue twilight, and a wall of dirt and gravel to my right to remind myself of the severity of the grade I was traversing. Whenever I dipped my bike into a corner, the meagre illumination of my headlight became a bright yet useless spot on the ground near my feet, leaving the curve ahead lost in an inky pool of blackness.

It was quite an experience indeed.

But I did find what I came for. You see, I had been told that the surface here was gravel, but it was not specified what type of gravel it was. I expected that it would either be hardpack gravel not unlike normal pavement in its consistency, or slushy gravel that would be a squirming nightmare to cross on any two wheeled vehicle. What I discovered was, instead, a continuous hardpack of washboard, which was a little bit unwelcome but not terribly disastrous. I would be able to ride up this on my road bike without issue, but descending would not be advised.

Luckily there are alternate routes off the top of Mt Madonna, so all is not lost. I think I will ride this road at some point, perhaps even over the xmas break if the weather cooperates.

In the meantime, I think Scooty-Puff got a bit of dirt on the rear wheel. 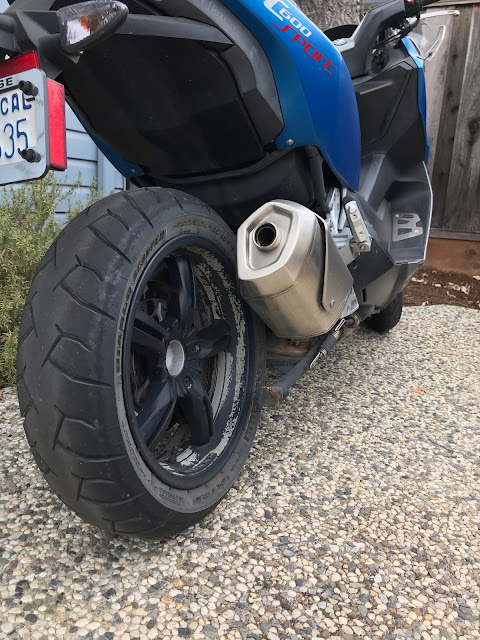 Posted by Nicoya at 7:38 PM No comments: