When I was on an Amazon shopping spree a little while back looking for decaf coffee for my cold brewing pleasure, I accidentally picked up a bag of whole beans rather than pre-ground. On the one hand this was a blessing as the other varieties of decaf were ground a bit too finely for my liking. On the other hand, I didn't actually own a coffee grinder.

I didn't, until now. 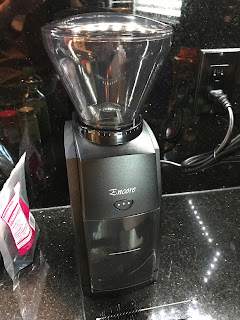 I'm quite pleased with this unit so far, it seems very solid and well built, though time will tell if it goes the distance.
Posted by Nicoya at 6:00 PM No comments:

Since the earth is still temporarily closed for business I've been slowly tweaking and setting up The Crimson Ghost to get things to my liking. One vital addition was a GPS mount, and I decided to go with a stem mount this time. 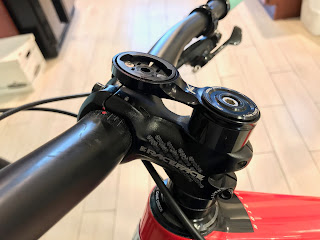 With any luck it should hold the GPS securely and out of harm's way. 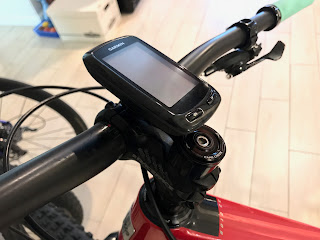 I also added a bash guard to keep the chainring from getting eaten by rocks I might roll over. 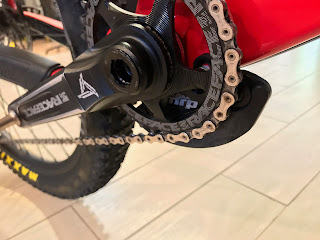 And conveniently the chain guard came with a sticker that was just the perfect size to hide some chips in the paint from the previous owner. 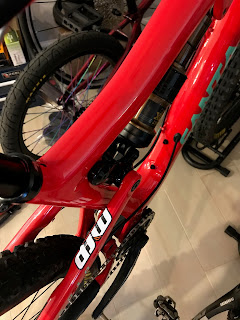 Ah, the joys of buying used. The eagle-eyed amongst you might also notice in this photo that I reversed the shock on the rear suspension. I did this to allow a bit more room for where I want to mount the bottle cage, which will be an adventure I hope to document in a future post.
Posted by Nicoya at 5:57 PM No comments:

Apparently rats are still finding their way into my car hole. They managed to chew open this bag and get at its contents overnight. 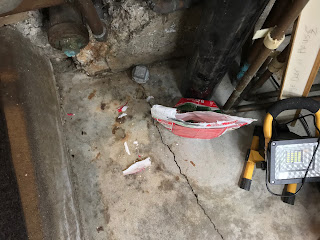 But something tells me they won't be back. 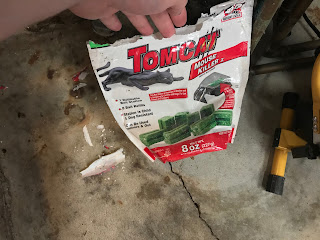 Posted by Nicoya at 5:46 PM No comments:

There are many tiny details that ensure a structure stands the test of time. One of those details is a drip edge at the outer edges of a roof. Without a drip edge in place, water approaching the edge of the roof will tend to wrap under the roofing material and rot out the eaves or barge boards.

As it would happen, almost all the roof edges of my house have drip edge, except for one spot. As you might imagine, the barge board and eaves rotted out there.

The first step was to remove a bit of the rotted barge board on one side. 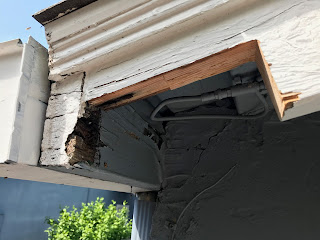 Thankfully most of the wood was still good and I didn't have to cut away the moulding and figure out what to do with that. In fact, even the wood I did have to remove wasn't all that terrible. 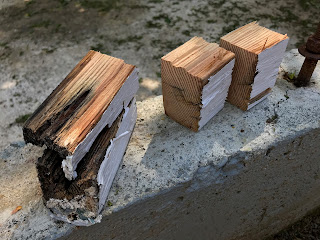 Rotten to be sure, but still not too bad. I caught it in time to save a more drastic repair.

To get to the rotten eaves I had to remove the eavestrough, and so I did. 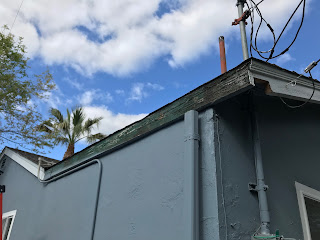 Obviously it had been overlooked the last time the house was painted. Maybe the last few times, it's hard to say. 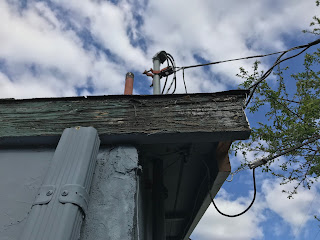 To keep things moving along, I cut and painted a chunk of redwood left over from replacing some dividers in the motorcycle driveway, and glued it into place. I was considering using wood glue, but the board was a bit rough where I cut out the rot so I used construction adhesive instead. 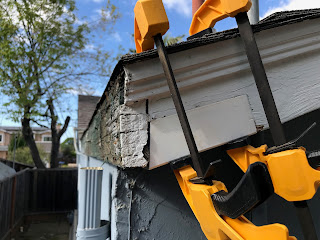 It's kind of amazing how much nicer the redwood looks than the original fir. I also pre-painted the redwood 2x6 I would be using to replace the rotted eave board while I got to work tearing the latter down. 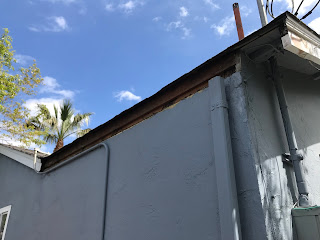 Thankfully there was no major rot or insect damage behind it. There was a bit of rot in the end of the other barge board, but it was only in the last half inch or so and so I decided to just leave it. 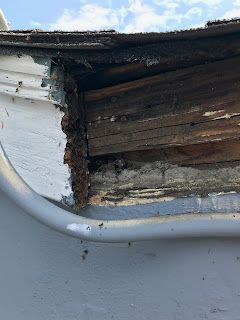 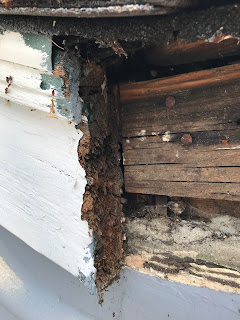 A little caulking over top will hide those crimes.

Despite how bad it looked and the fact that it wouldn't hold a screw in a number of places, the eave board was, again, not all that bad on the inside. There were a few rotted cracks and a fairly sizable soft spot near the end, but otherwise the wood itself was pretty solid. 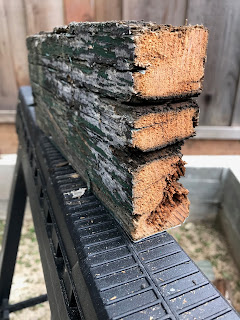 Once the paint was dry on the new 2x6 it was a pretty easy matter to put it in place, especially given how light it was thanks to being kiln dried. 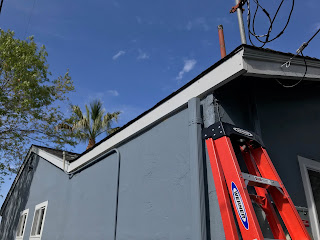 I had initially considered leaving the eavestrough for the following Monday, to give the paint behind it a little longer to cure and dry, but I was still feeling pretty good by then so I decided to knock it out. 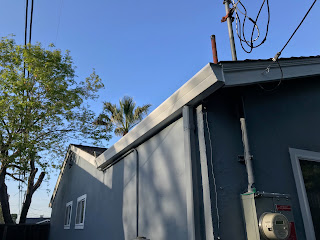 It's a good thing I did, as it rained the following morning.

Now the keen-eyed among you might have noticed that there's still no drip edge. Unfortunately due to complications involving the end of the world I wasn't able to get to the home center to buy a new length of drip edge to install. Rest assured, though, as soon as the apocalypse is over and the world is reborn anew, I will remedy this oversight.
Posted by Nicoya at 5:44 PM No comments:

The rear door on the PedoVan started acting up again, and after beating on it for a half hour or so I finally figured out what was going wrong. When the outside rear handle is pulled, it presses against a toggle, the other end of which pulls a cable that goes down to the latch mechanism to do whatever it is it does when you pull the outside handle.

This toggle was sticking, so the door was acting like the outside handle was already half-pulled.

This meant that when I tried to unlock the door, it did that usual thing that happens when you unlock the door just as someone's trying to open the handle: nothing. And since it was stuck in that position, locking and unlocking it again, the usual solution, did nothing useful.

So once I found the source of the problem I soaked it down with lithium grease and hopefully it'll never happen again. Hopefully.
Posted by Nicoya at 1:48 PM No comments: 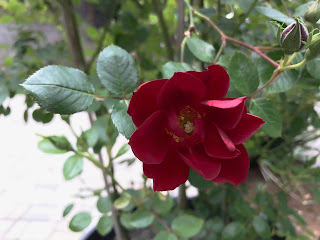 First rose of the season popped out, and there's about 30 more buds where that came from. Some of the Yarrow looks like it's about to bloom too, which will be a nice conclusion to that headache-inducing adventure.
Posted by Nicoya at 1:46 PM No comments:

Opportunity knocked recently. I had been looking towards the idea of possibly getting a Santa Cruz 5010 as my next bicycle sometime in the future. As it so happened, a coworker was selling theirs in a very nice spec at a very nice price. 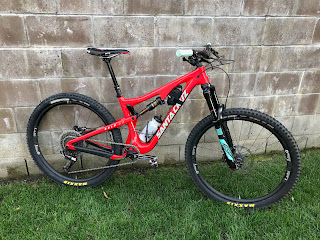 So it followed me home. Say hello to The Crimson Ghost.

Now my memory is a bit shady, but I recall contemplating using that name on my BMX before forgetting what name I actually settled on for it. With that in mind, my BMX will henceforth be known as Euclid, because it's built up for flatland.

Speaking of building, bikes don't tend to fit into boxes in one piece. 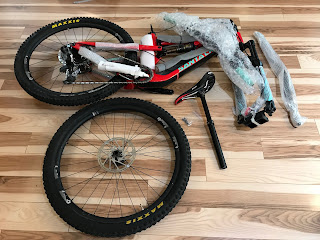 Thankfully they're not too hard to assemble.

Now, being a used bike purchased from a coworker with a separated shoulder it does have a few scratches and dings on it, but nothing too major. Just enough to take the "new bike shine" off and keep me from worrying about adding a few battle scars of my own.

I haven't been using bottles much anyway, as I've got the hydration bladder for my backpack which I wear on longer rides.

Anyway, I'm looking forward to getting out and putting some miles on it. You know, after the apocalypse is over.
Posted by Nicoya at 10:30 PM No comments:

Gnawed at the wood some more this weekend. Things are slowly starting to come together. 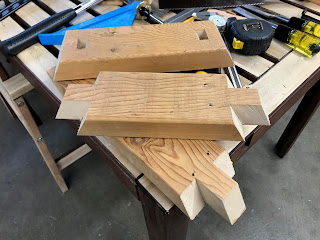 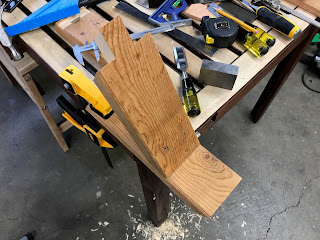 In some cases, even literally.
Posted by Nicoya at 10:18 PM No comments:

So my Mac Mini just up and died on me. I saw a notification to install the latest 10.15.4 update and clicked through to let it do its thing and went on my merry way. It was supposed to reboot part way through the install but when I came back later to check on it the machine was powered off... and never powered back on since then. Went through all the debugging steps, called Apple and tried more stuff, but no signs of life at all. It's probably coincidence that it happened during an OS update but who knows?

Anyway, I dropped it off at the one repair place still open in the Bay Area and here's hoping it'll get fixed up quick. Luckily everything is backed up and Applecare is still in effect so I shouldn't have any data loss, just wasted time having to make do without the machine.
Posted by Nicoya at 6:09 PM No comments:

The Pedals on the Bike Go Round and Round

So I decided to swap out the XT pedals on Purple Haze for XTR pedals. Dropped a few grams, which I'll probably never actually notice when I'm out riding. 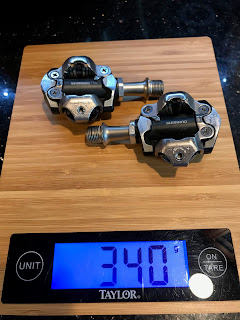 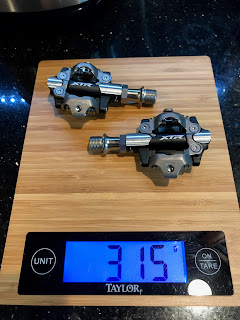 It's the thought that counts, right? The bigger reason I did the swap was so that I would have a set of pedals to mount on The Crimson Ghost; the upgraded pedals were only a few dollars more than the regular ones I usually buy and it made the most sense to put them on a lightweight bike like Purple Haze.

But what bike is "The Crimson Ghost", you ask? What bike indeed...
Posted by Nicoya at 6:05 PM No comments:

Catching up on projects, last weekend I got a pair of tool pouches to fit on my road bikes, matching the one I got for my mountain bike. While it would be ideal if they worked just off the shelf, I didn't trust the open bottom of the side-elastic to retain the patch kit on one side or the multi-tool on the other, so I stitched the hole at the bottom closed. 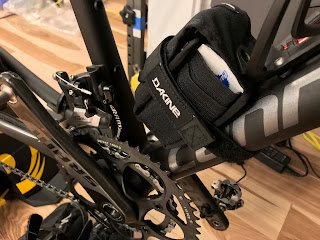 Also in this photo: the chain keeper I installed on the front derailleur. It's the little curved arm with SRAM printed on it hiding behind the chainrings and front derailleur cage, and it keeps the chain from falling off the inside of the smaller chainring in case of a bad shift. Just a cheap insurance policy.

Back on the sewing side of things, a while back I bought a satin sheet set from Amazon and, as nice as it feels, the slippery fabric and somewhat feeble elastic on the fitted sheet means that it doesn't hold securely to the mattress and tends to wrinkle up overnight. 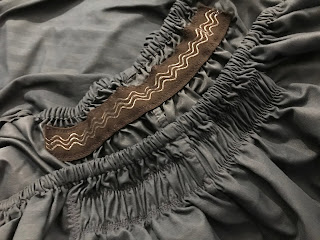 Problem solved. The wavy stuff is a silicone grippy material that came on the elastic. I had actually purchased it for a different project but there's plenty left if I want to pick that one up again.

One last picture, this time just a teaser of a project I started this week and will probably, hopefully complete by next weekend. 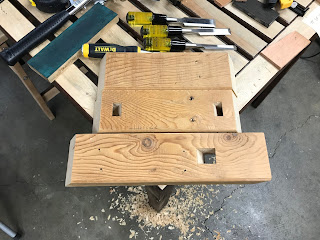 What's it gonna be? Gotta wait until it's done and it'll all become clear.
Posted by Nicoya at 7:54 PM No comments: