I went for a bike ride today. Copy-pasted the description here because Strava doesn't like to show it unless you're logged in:

Almost a year ago I joined Charlie on his week of everesting by doing a climb of Montevina by way of Kennedy. I had planned to join his double-everesting of On Orbit by doing two laps of On Orbit but when the day rolled around I was still cooked from the previous ride and the weather was kinda shit so I didn’t go.

This is, finally, my redemption ride. Did two laps of On Orbit for the first time in the middle of a full Bohlman.

So when I moved in here the little knob for the fridge water filter thing was broken, and left behind by the previous owners. I glued it back together and shoved it back into service, but sadly it only lasted one filter before it broke again. Fail me once, shame on -- shame on you. Fail me -- you can't get failed again.

Naturally the only logical option is to 3d print a replacement, and that's exactly what I did. 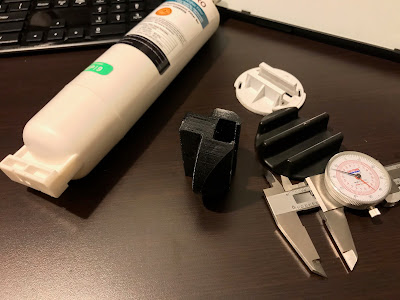 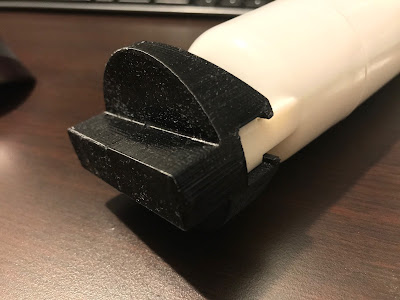 I ended up splitting this print into two identical halves so I didn't have to worry about printing overhangs. Oddly enough I had a little bit of post-printing warping where the split line ended up bowing a little after removing the print from the printer. A little 120 grit post processing cleared up that issue right quick though, and I superglued both halves together.

I'd say it's a nice improvement over not having a knob. 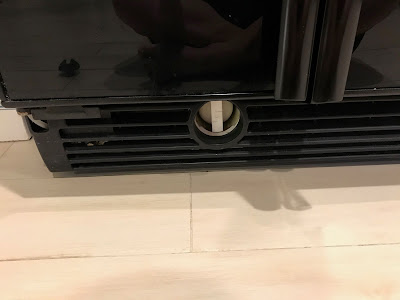 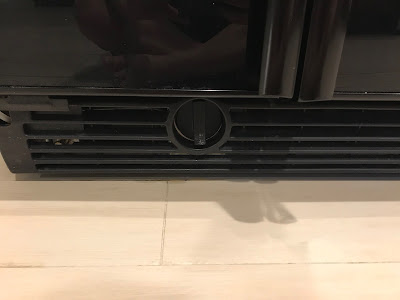 Posted by Nicoya at 9:49 PM No comments:

A Fresh Coat of Paint

So the previous owners had a dog that they liked to keep in the garage for whatever reason. Dogs being dogs, it didn't like being cooped up in there and clawed at any opening it could to try to get out. This resulted in a fair bit of damage to both the door leading outside (which is a writeoff thanks to both the dog damage and just general rot and neglect) and the door leading into the house.

I had previously repainted in the inside half of the door leading into the house, just so I could contain the ugliness to the less trafficked side of the world, while I mulled over the option of either replacing the door or fixing the other side.

This weekend I finally got around to fixing the other side.

Step 1: forget to take a "before" picture.

Oops. I thought I'd taken a picture of that side of the door before that I could reuse, but apparently I never did.

Step 2: chisel out the damaged section of plywood veneer. 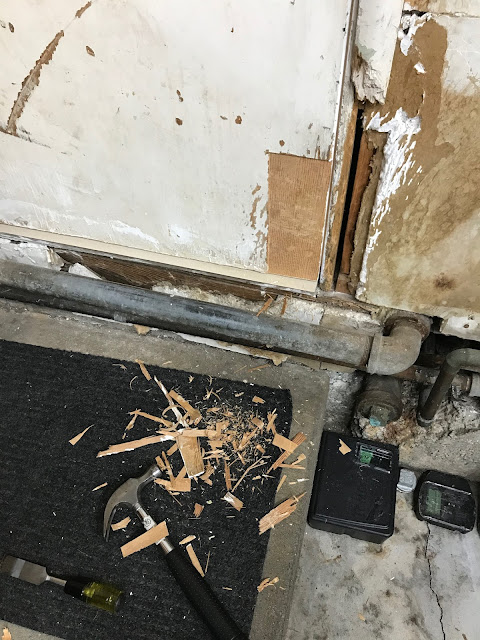 The dog had managed to claw its way through two plys of the plywood, so I scored along the edges of the damage and chiseled away the remains down to a flat base of reasonably solid wood.

Step 3: glue in a conveniently perfectly sized piece of veneer sliced from a 2x4. 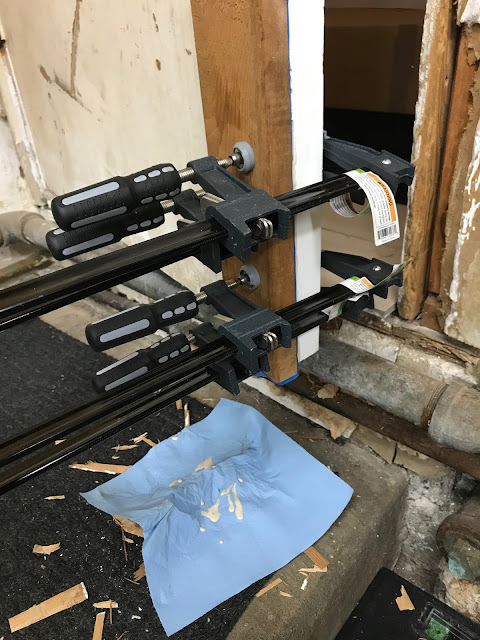 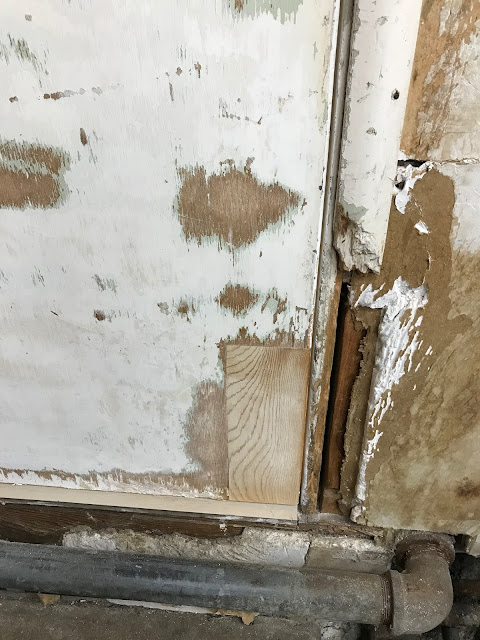 So a few weeks ago when I was replacing my broken bandsaw blade and tires I made some test cuts by slicing some 1/16"-ish veneer slabs out of a scrap piece of crappy 2x4. Fast forward to today and it just so happens that one of those pieces is the perfect size and thickness to exactly fill the space left after chiseling away the damaged plywood. Weird how that works out sometimes.

At this point I had also given the door a bit of a sanding. I was hoping to possibly sand smooth the places where the paint had chipped out but the sanding didn't go as smoothly as I'd hoped so I opted to fill the chips and scratches and other damage with wood filler. 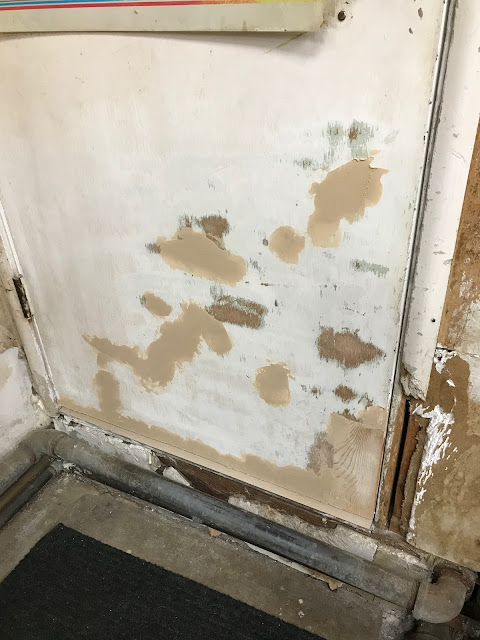 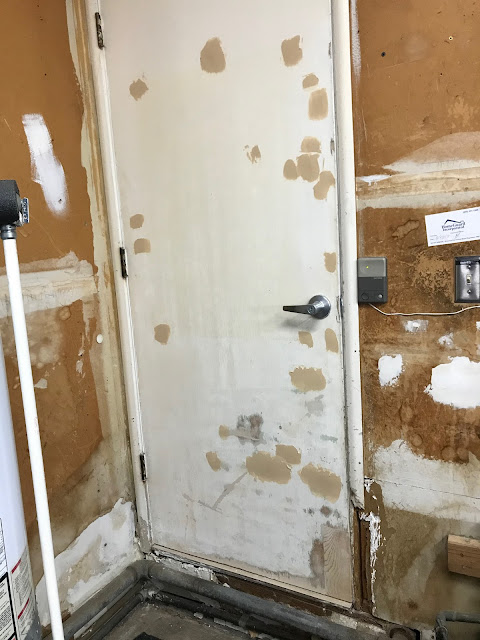 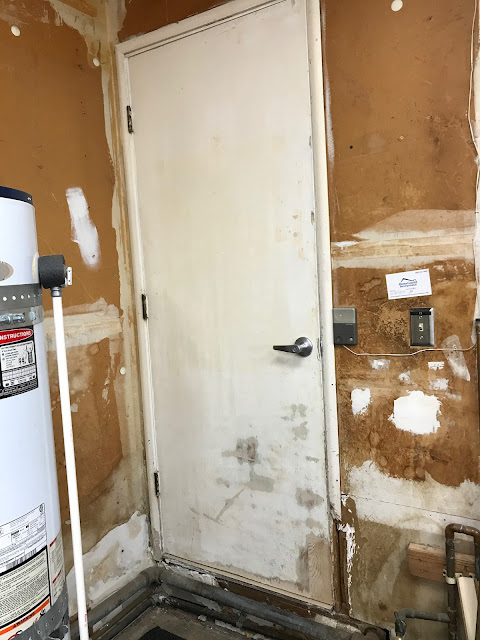 I ended up doing two coats of wood filler. Initially I had only filled the big divots, but upon reflection I decided that if I was going to go to all this work I might as well go all in, so I sanded, applied a second coat, then sanded everything down smooth. 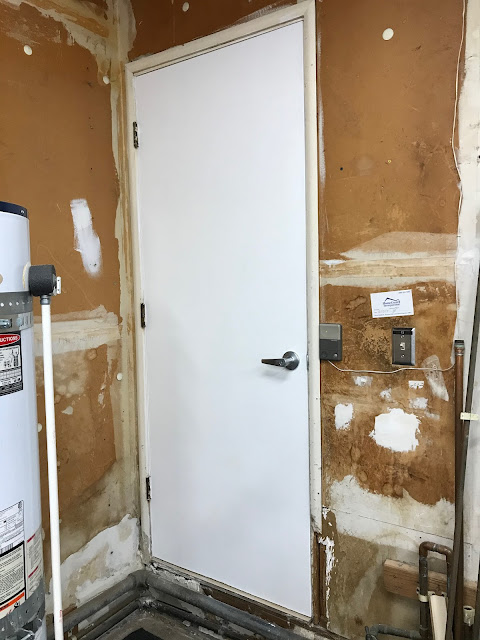 It took three coats of paint to cover the grimy "white" that the door was blessed with previously. I had a lot of difficulty fighting sags in the paint, and ended up having to do a fair bit of sanding after coat 2 to get things reasonably smooth before applying coat 3. I also thinned the paint a little for coat 3 which helped me smooth on just the thinnest possible coat of paint. The end result isn't really perfect, but it's good enough and a huge improvement over what I started out with.

I still need to replace the trim, but that's a project for another day.

Posted by Nicoya at 5:36 PM No comments:

I finally got around to figuring a few things out for my front door monitor this week. It involved a little frustration and hair-pulling and yelling at whoever keeps screwing up the entire concept of web development so badly. You know, the usual stuff. But at the end of it all... 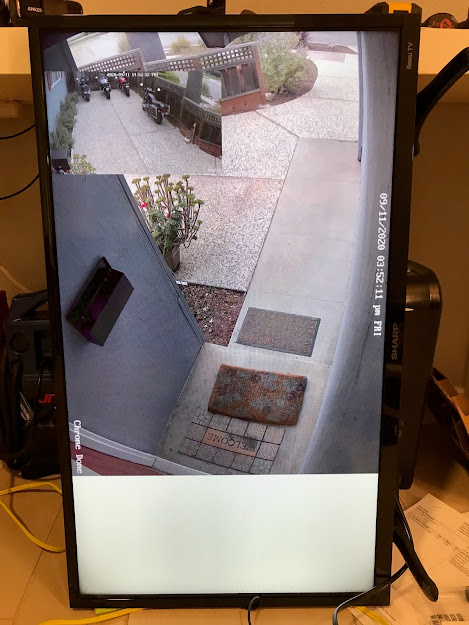 And yes, the clocks are set wrong for some reason, I think the time zones got messed up.

Posted by Nicoya at 4:00 PM No comments: 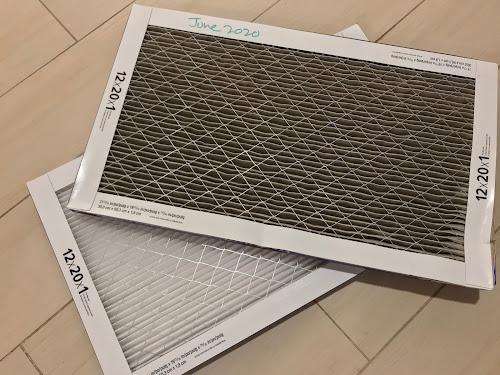 Hmm, it's almost like there's been a bunch of pollution in the air recently. I wonder what could be causing it?

In semi-related news I finally got around to washing the PedoVan. 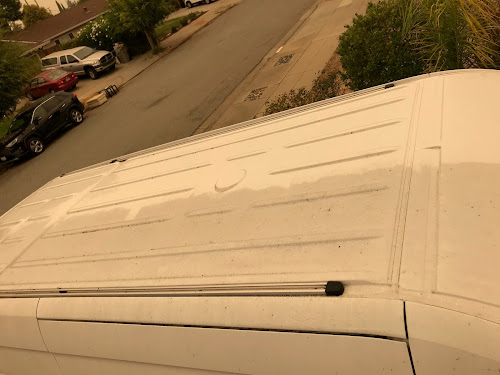 This might be the first time I've ever washed the roof. I didn't own a ladder tall enough to reach up there back when I lived in an apartment, and I don't specifically recall washing it after I moved here. It may have been washed once or twice when I took it in for an oil change, but I honestly have no way of knowing.

It's a bit of a silly exercise of course, it's not like anyone ever sees the top of it. Also yes, the Bay Area is still on Mars today. I think we're supposed to get teleported back to earth sometime over the weekend.

Posted by Nicoya at 3:14 PM No comments:

A Lot of Zeros

I decided that since the heat wake broke I'd take a quick trip down to Monterey to pick up some oil and a filter for Gregg. Why Monterey? Because it's not here.

So I saddled up on Orthrus and headed down. Despite the 40c+ temperatures earlier this week I actually felt a little chilled with my textile pants and mesh jacket. Probably should have opted for the textile jacket too. Wasn't too bad at least.

As I was pulling into Watsonville though, the odometer rolled over and I pulled over to take a quick snap: 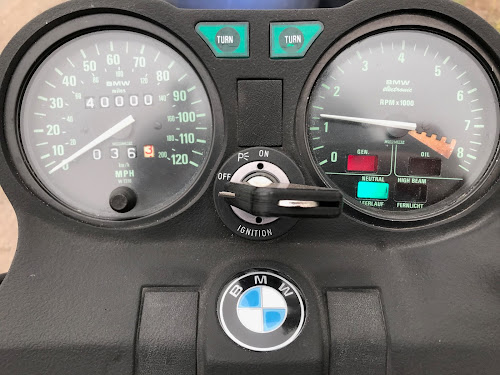 Posted by Nicoya at 2:52 PM No comments:

More Cush for the Tush

The sun is a deadly lazer and has taken its toll on the seat of Rabbit Season in the form of rather unfortunate UV breakdown. 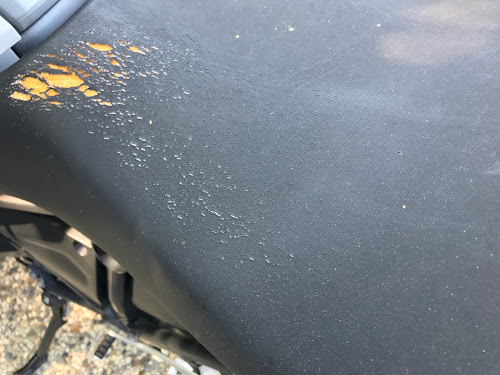 This is not ideal. 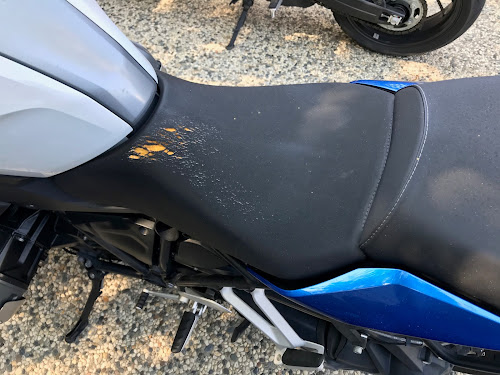 But the good news is that a coworker just happened to be selling a similar model bike with this exact model of seat as a spare, and I was able to convince him to part out the spare seat for a sweet price. 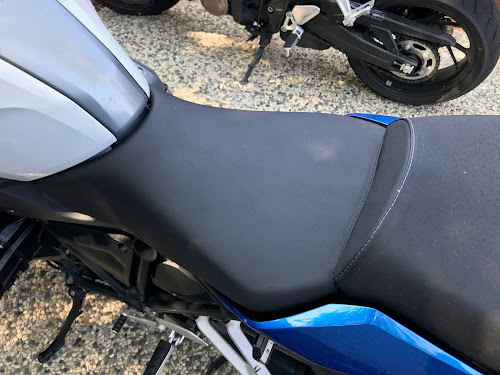 Posted by Nicoya at 9:22 PM No comments:

No Mountain Lions Were Harmed

Since I had Friday off to begin my week of vacation time, I decided to start things off with a blast... through the hills, of course. The weather was pretty much perfect for a ride through the scrubby exposed hills of San Vicente, Calero and Cañada Del Oro. So I saddled up on Blackbirb and rolled out early in the morning.

I had initially planned to ride a shorter route and drag Tyler along, but he had some stuff to do so I went on my lonesome and completed a route that I had been intending to do back when I was devoured whole by a mountain lion a few months ago.

Specifically I wanted to get to the highest point on the Bald Peaks trail, which runs along a bit of a ridge line through Cañada Del Oro. As such it's a bit difficult when on the bike to tell which part is the peak, and on my previous ride I had gone out-and-back on the trail and it wasn't clear if I'd made it to that high point or not.

This time I did a loop that encompassed the high point, guaranteeing that I'd pass through it. Of course I wasn't starting at the base of the trail leading to that goal point, so I had some riding between here and there to cover.

Thankfully my legs are doing great these days and I had basically no trouble covering the distance. I even had a great time blasting up one of the really steep sections of trail that, in previous attempts, I'd had to stop part way up on. Even late in the ride my legs still felt like they could keep on going forever. I love this feeling.

Really, the only low point of the ride was accidentally dropping one of my energy chews in the dirt. RIP that energy chew. 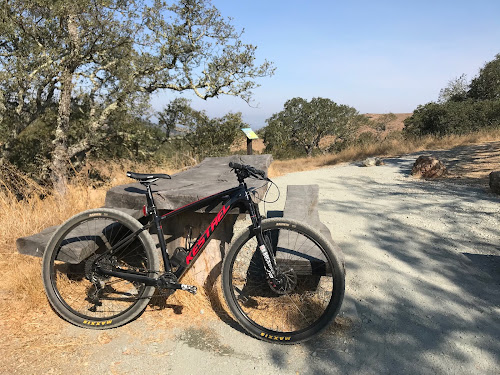 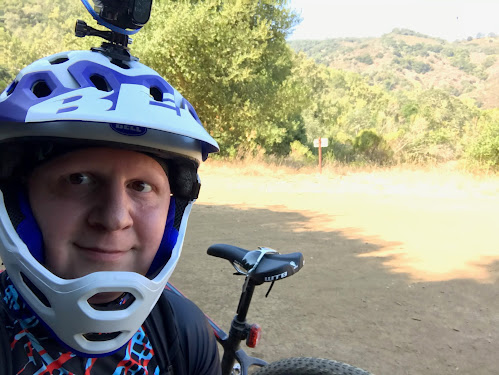 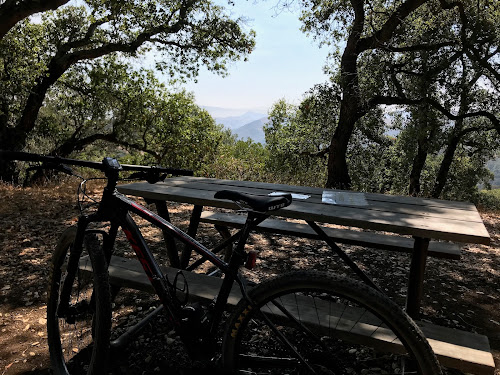 If you were to ask me if the trail was dusty, I would say the answer would be "a tad". 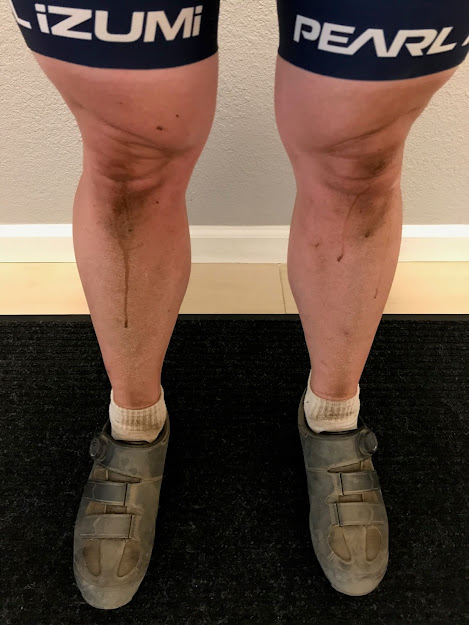