So not too long ago I noticed a hum coming from my speakers. Diagnosing a little: turning off the little desktop amplifier driving them caused the hum to go away (naturally), and changing the volume didn't seem to affect the level.

This pointed to an obvious cause: 120hz line noise was getting into the final stage of the amp. Not particularly surprising given that it's just a cheap Chinese unit.

So out came the screwdriver and scope to investigate the source. 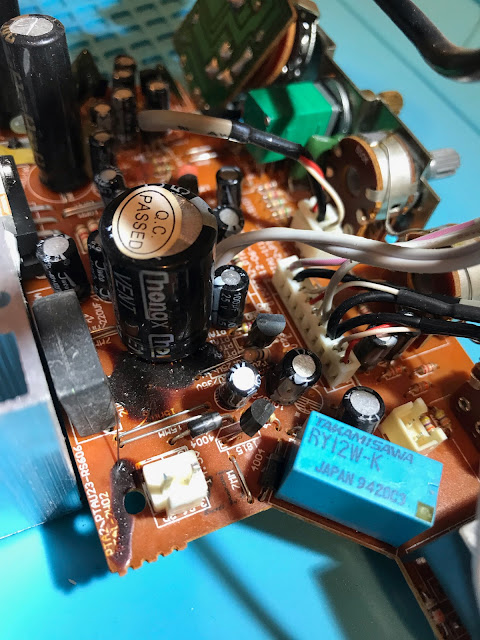 Well it can't be the main filter cap, it passed Q. C. so it must be something else.

Despite the schmoo on the board, the main cap hadn't actually emptied its bowels of all it contained. I think the source of that stain was a connector that sits just above it, which had some similar looking retaining compound on it.

I did remove the cap to test it though, and it seemed to still be holding close to the value printed on the label.

Of course, a little more investigation revealed that the power supply is incredibly primitive: the AC comes in through a simple mains transformer to the white connector near the bottom of the above photo, then goes through a bridge rectifier (the black rectangular component just above and to the left), before getting filtered through the big capacitater in the middle. And that's it, no regulation at all.

So that means that the power rail has a constant sawtooth ripple to it, as the main capacitor gets charged up at the peak of the rectified input, then sags back down again as the input voltage falls below forward conduction on the diodes. The scope says it's on the order of 300mv on a 25-ish volt DC supply. This same ripple is present at the power pins of the dual power op-amp (visible just above the rectifier in the photo at the very left edge), so it's not like it's disappearing somewhere along the way.

With this in mind, the first thing I'm gonna try is replacing the 2200µF main cap with a 3300µF, which I can get in roughly the same size and voltage rating. If that doesn't work (and it may well not) then the next step will be to scoop the transformer out and replace it with a 24v switching supply, which I can just solder straight to the DC side of the rectifier (or remove the rectifier entirely and use it somewhere else maybe).

Honestly I'd prefer to jump straight to plan B, but with parts availability like it is these days, I'm looking at something like a 20wk wait time for a power supply. Ugh.

So let's hope a new capacitato does the job.