The Downs and Ups

With the time change comes the off season for my cycling, and the switch back over to doing my weights as my primary form of exercise. I decided to take advantage of my peak cycling physique this weekend and hit up Demo forest for a second time on The Crimson Ghost. 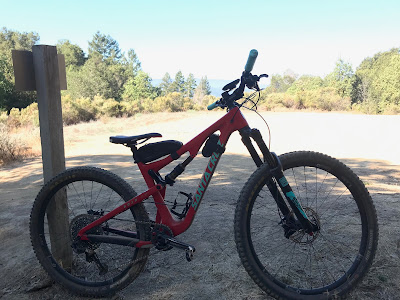 I had previously only done a single lap down Flow trail, and I wanted to try Braille which is the other top rated trail in the park. There's also Sawpit and Corral but they're a bit less popular for a variety of reasons (Corral is rather short, and Sawpit is way down at the bottom of the forest which makes for a longer climb out).

So I saddled up and rode to the top and took my first run down Braille. It was, as the name might suggest, rather bumpy. Manageable though, I made it down in one piece, though I did mistake a roll for a drop and confirmed that my bike's suspension does have exactly as much travel as advertised. It's a decent mix of technical trail features, but at the end of the day it mostly just reinforced that technical trail features are not really my jam.

Since I still had my legs under me, I rode up Sulphur Spring and made my way across to Flow to see if my riding had improved any since my first attempt (which was, not coincidentally, the first time ever riding The Crimson Ghost).

Flow did not disappoint. I was able to take the bermed corners with more confidence than my previous attempt, but I was still going pretty slow through them and in general riding pretty heavy on the brakes. Cornering on a mountain bike at speed is not something that tends to come naturally, and I'll need to work on my skills a bit more before I feel like I've mastered it. As a bonus, I didn't eat shit this time, so I've got that going for me.

Once that was wrapped up it was high time to climb back up to the parking lot, pile in my van, and go home. 40 minutes of grinding up the hill later and that's exactly what I did, to close out a lovely morning of riding my bike.