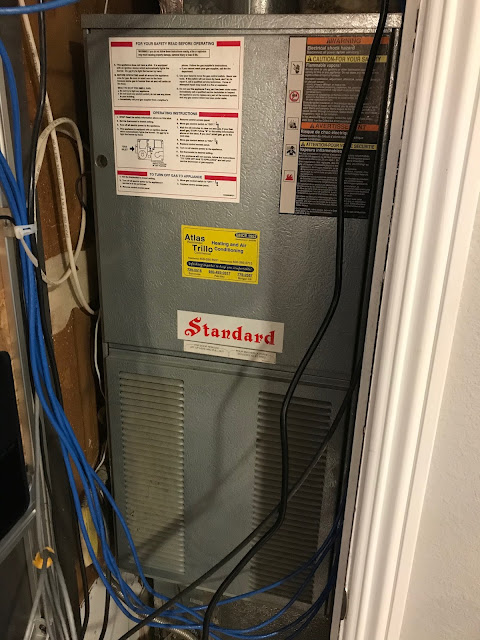 The loud part has a number of causes, one of which is the direct-return installation where the furnace uses a single central return vent plumbed directly into the blower plenum, which means that there's exactly zero ductwork on that side of things to absorb the noise. But it's also partly caused by the flue gas blower fan being bent and rubbing against its enclosure. Keep this in mind, we'll come back to it later.

The unreliable part came in the form of the furnace lodging itself in an error mode, blinking a code indicating a high limit error. What this means in theory is that the yellow loop that goes through the high-temp limit switches and the thermal fuses was going open-circuit, which you can see in the diagrams below. What this means in practice is that the furnace would randomly refuse to put out heat. 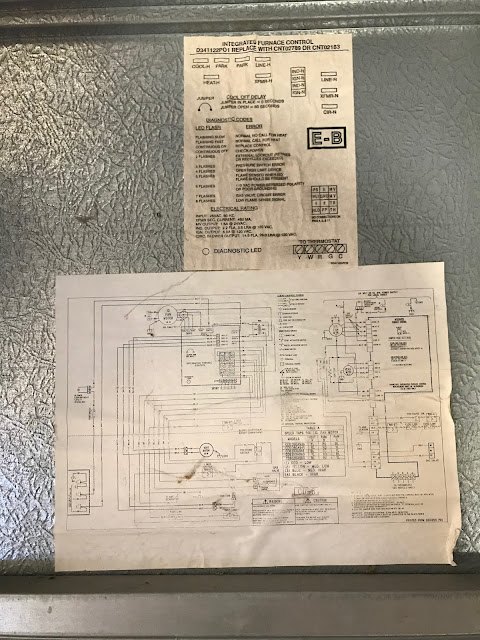 Now a noisy furnace will still keep me warm, but a furnace that won't put out heat is failing in a fairly fundamental task. So, time to diagnose! 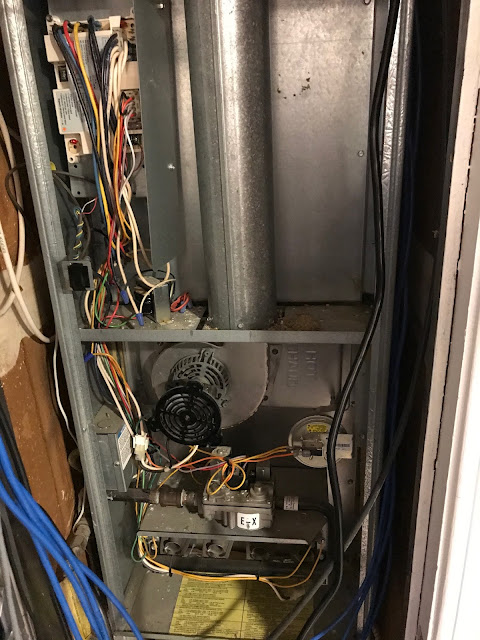 I whipped out the multimeter and traced around the yellow high-limit sense loop. 24v goes in, 24v goes out, 24v goes in, 0v goes out. Well there's your problem. The issue was the burner-area high temp limit switch. It was supposed to be normally-closed, but was, in fact, only normally-mostly-closed, which doesn't really cut it. 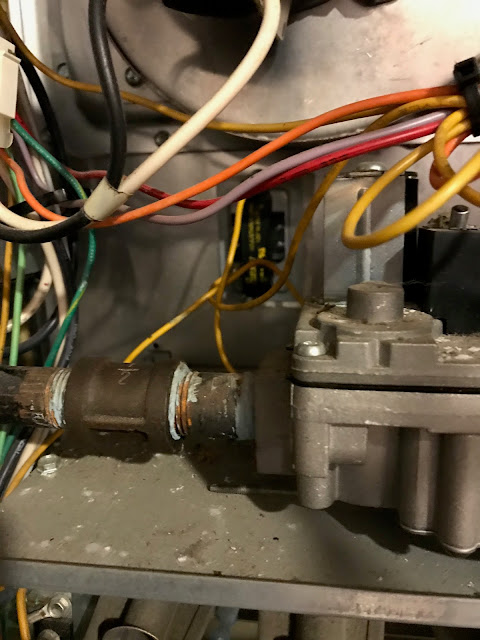 So a replacement is ordered, personally delivered overnight by Jeff Bezos himself, and out comes the old switch. 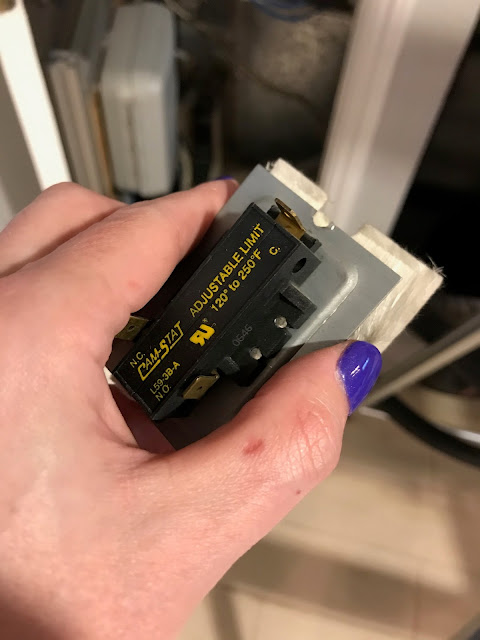 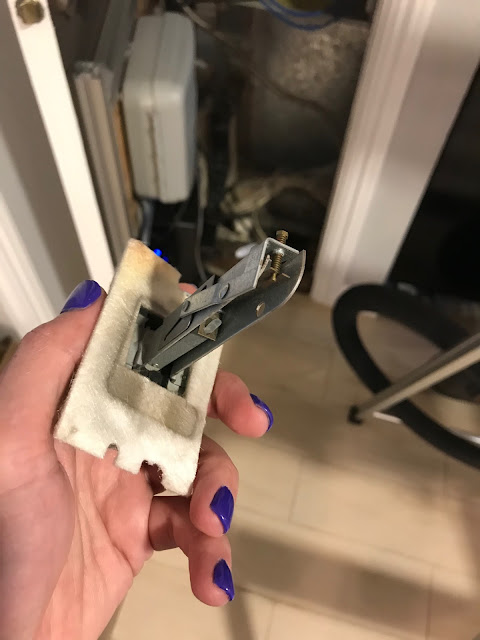 And in goes the new switch. 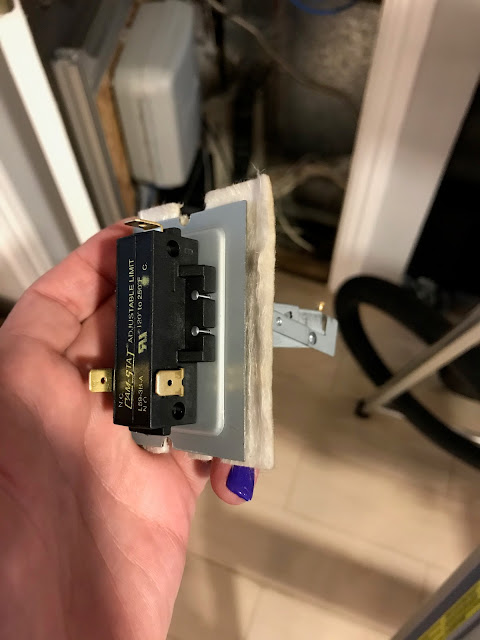 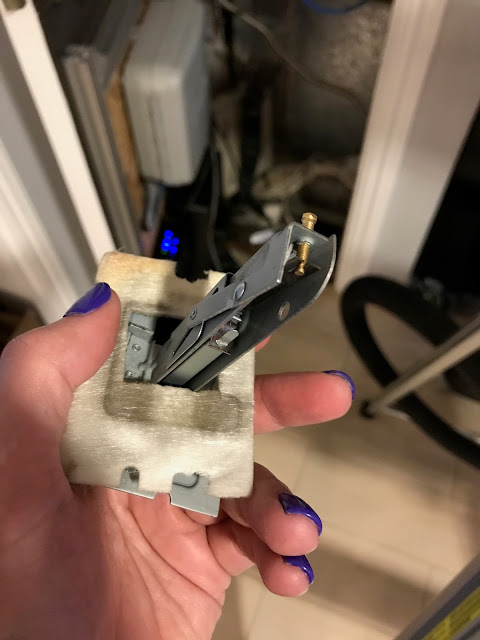 The switch didn't come with the fiber gasket, so I reused that from the old one. Easy-squeezy.

So after everything is popped back into place, I set the thermostat to char-broil and... 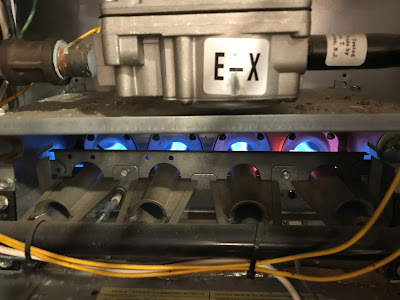 I have created fire! Stolen from the gods themselves, tamed and domesticated by mankind.

As a bonus the furnace is a fair bit quieter now, since I also took the opportunity to pull out the flue gas fan and bend the squirrelcage back into shape, as well as giving the bearings a little squirt of oil. It still makes a lot of blower noise through the cold air return but at least the metallic schff-schff-schff-schff of the flue gas fan is gone.

A job well done, if I may be so bold as to pat myself on the back.

Update: those back-pats may have been premature, the problems continue...