Don't Fence Me In

So after a few windy days the fence gate in the side yard was not in the best shape. The hinge side on the fence post was doing fine but the latch side attached to the garage was in the process of not being attached anymore.

I pulled the jamb off the wall (not too hard since it was only nailed into the stucco) and brought it into the garage for some disassembly. I pulled the stop off, removed the old nails, and then added some wood glue and screwed the stop back into place.

Next up I drilled and countersunk some holes for some 4 inch long 3/8 inch lag screws, reusing the locations of the old nail holes to save me the trouble of swiss cheesing more holes through my stucco. 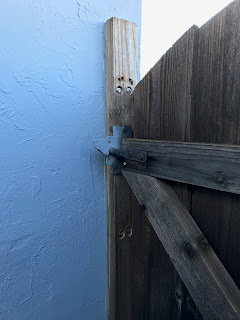 Well, sort of. Some of the nails were driven in at a pretty odd angle so to line things up with the stucco holes I had to deviate a bit in the placement. I also discovered that I shouldn't have trusted the nail holes at the bottom, as they were placed too low to hit the wood framing of the garage, and the lag screw just hit the concrete foundation instead. Lovely. Had to move that lag screw up a bit. 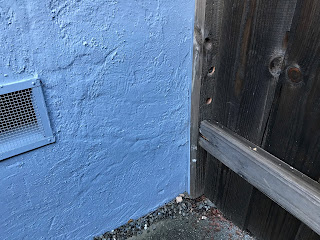 (The bottom of the vent on the left is at the bottom plate of the wall framing).

Turned out ok in the end though.

So that was Saturday's fun. I had some grand plans to do some more work here and there on Sunday but the rain in the forecast kept me from starting anything too involved. I drilled a hole in the bottom of a pot (why on earth do they sell them without drainage holes?) with some diamond hole saws I got off Amazon, and raked some leaves in the back yard. Unfortunately, due to all the rain, the leaves and stuff on the patio was a bit sticky so I'll need to wait until it dries out a bit and hit it with the leaf blower again to clean up the remaining gunk.
Posted by Nicoya at 7:23 PM