There's more than one way to do it

I like to keep a minimal patch kit on every bike I ride, or at least the ones I ride any distance away from home (so the BMX gets a pass). At one point I'd been using an under-saddle bag to hold these goodies, but over time it got old and faded and it never really held things securely and rattle-free. So given that, I decided to explore different options and ended up with 3 different solutions for 3 different bikes. 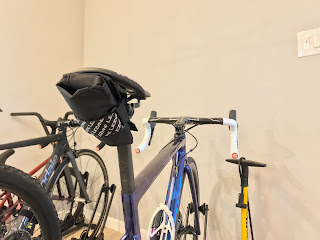 The tool roll under the saddle is perhaps the most classic solution for road bikes, and so I bought 3 different tool rolls to test out which one I liked the most. I'm glad I got more than one as they seem to be of highly variable design quality.

One was from SKS, which is a fairly highly regarded european cycling accessories brand. The tool roll was, somewhat curiously, designed to fit under the handlebars rather than the saddle, and despite its fairly large size it was incapable of holding even a bare essential set of tools before becoming too bulky to properly roll up. Total fail.

I had more success with the Lezyne tool roll, as you can see from its place securely strapped under the saddle. However, it too suffered from a mild lack of space, and I wasn't able to include a CO2 inflator without the roll getting too bulky. Luckily I run fairly low pressures on this bike so it's not too difficult to pump up by hand. (You can see the purple mini-pump just behind the bottle cage on the down tube)

So with that bike down, it's on to the next: Blackbirb. 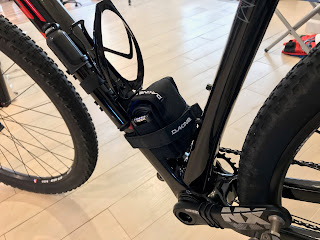 For this bike, an under-saddle solution wasn't a good option as the motion of the dropper post would put the tool roll/pouch/bag/whatever too close to the rear tire when the saddle was in the low position. For a while I was running a small frame bag that I designed and sewed myself, but there were a few features I wasn't happy with (mostly that it didn't mount tightly enough to not rattle against the frame) that lead me to the thought of either taking another shot at designing a new one, or going for an off-the-shelf solution. The latter won out and I got this Dakine down tube pouch.

That's not to say that the pouch was without its own flaws. The designers had intended for it to hold a pair of CO2 canisters, a MTB-sized tube, and some tire levers stuffed in the elastic sides. I personally have no use for tire levers, and instead opted to put a multi-tool in the elastic sides, but since a multi-tool is bulkier and heavier than a set of tire levers it seemed likely that it would slip out the open bottom of the elastic strap. Thankfully the strap was close enough to the bottom edge of the pouch that I could just stitch the two together, and now my multi-tool is safe and sound and well restrained.

This all came together to make a nice solution for my mountain bike, but due to road bikes being a bit more slender it wouldn't work on my third bike: Dirty Dozen. 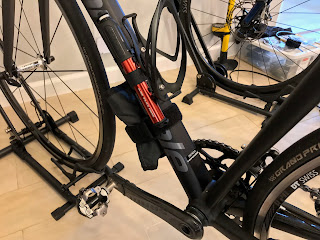 When I bought the tool rolls, I actually bought three of them all at once to decide which pleased me the most. The Lezyne was good enough to stick on Purple Haze, the SKS was a bit of a dud, and this final one, a Camelbak, did the best job of holding a full set of roadside repair tools (multi-tool, tube, patch kit, CO2 inflator). The downside of this one, however, was that it didn't have a proper strap to hold it to the underside of the saddle, so I decided to try out a standalone downtube strap (in this case a "Granite Rockstrap") for securing the tool roll.

At first I tried strapping it under the saddle and it worked ok-ish there, but the buckle that held the tool roll closed kept the strap a bit off center and it was difficult to position it in the perfect spot. So I did a little experimenting and found that just under the down tube was the perfect position for it (above the downtube between the pedals wasn't an option as the tool roll was slightly too wide and would interfere with the chainrings).

Barring some unforeseen mishaps with these solutions, I think I'm pretty sorted for on-bike storage at this point. Now I just need to find the time to actually go out riding...
Posted by Nicoya at 1:57 PM