Took a stab at disassembling some of the hantavirus shed today. 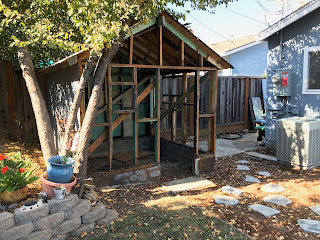 It's coming along ok. I'm not sure if all the rot and termites are making things easier or harder. It's nice that the wood weighs so much less and falls apart in my hands, but on the other hand it'd be nice to have something solid to get some leverage against sometimes.

Got my garbage can stuffed with about half the debris so far. Gonna send out the other half next week then pull down the remains of the remaining plywood on the walls, then probably pull off the OSB from the roof (which is relatively new material and I'll probably save).
Posted by Nicoya at 1:20 PM