Finally got around to taking down a bit more of the rickety shelving in the garage. 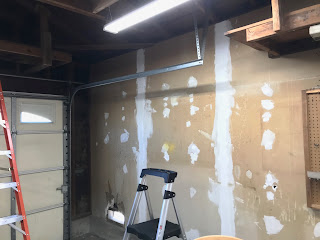 It's not much but it's something. Also patched up the drywall a bit (though eventually I'm going to rip it down so I can stuff insulation in the walls). The drywall tape was actually peeling off of the joint between the panels, so I replaced it with the fiberglass mesh style which shouldn't have that problem. I'm not going to bother patching up the dog-eaten bits by the vent until I redo the walls.

I also took the opportunity to vacuum up some of the mouse turds from the shelf above the garage door, and clear away some of the old pop cans that had been tossed up there. One of the cans was a coke can from the 1996 olympics so that'll give you an idea of how long it was collecting dust. (No, it's not worth any money)
Posted by Nicoya at 2:27 PM