Some people do better than others at holding back the tide. 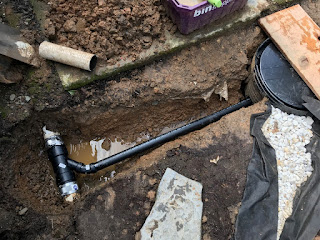 The plumbing for the sump pump is now spliced into the drainage pipes. I'm not 100% thrilled with the couplings I used for joining the ABS to the existing drain pipe though though. The existing pipe is a really lightweight triplewall, and the OD seems to be slightly smaller than usual for a 3 inch pipe. Thankfully it only has to be mostly watertight; as long as 99% of the water ends up in the street, the remaining 1% can go around in a circle as much as it likes and it won't harm anything.

Next up is backfilling this trench and spreading the mulch back out. It's really kind of amazing how wet the soil is in this spot, there's almost a constant drip of water coming from the uphill side, so it's no wonder it was getting into my crawlspace.

Depending on how things work out I might extend the drainage to the other side of the sump, which would involve chipping out some rotted concrete and probably just doing a gravel-filled (and broken-concrete-filled, likely) trench without the perf-pipe, since it's only about a 5-foot length. I'll wait to see how things work out first though, no need to do more work than is necessary, especially when it involves digging out soggy dirt.
Posted by Nicoya at 10:28 PM

On the bright side, it means you won't need to water your postage stamp to keep it green.

Nah, I'll still need to do that once summer comes and everything dries up.