It’s only on fire a little bit

You see, it all started when I forgot to switch off the fuel petcock, which usually results in a small puddle of gas below the bike that leaks out of the weep hole in the float bowl, and a distressing drop in fuel mileage.

But today it decided to drain into the cylinder instead, which meant that when I tried to start it, it hydrolocked. The solution to this issue is to, in some way, open the cylinder and cycle the piston to eject the excess fuel. Usually one would do this by removing the spark plug, but since I didn’t have a socket and wrench on hand I instead opted for disconnecting the carb from the intake. This is quite easy to do on the R65 since the carbs are mounted to the side of the bike and held in place by some hose clamps. 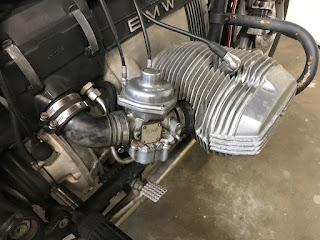 So I loosen off the carb, put the bike in gear, and push it backwards until the fuel spits out the intake port and onto the ground. Then to make sure things are clear I put it in neutral and cycle the starter to turn the engine over.

This does two things: It ejects the remaining fuel into the exhaust, and sets fire to the gas in the intake. Whoops.

As the subject line says, though, it was only a little bit of fire and easily extinguished.

Once that was taken care of I put the carb back in place and fired up the bike, riding it over to the dealer to pick up a new float needle to hopefully keep this from happening again. Hopefully. 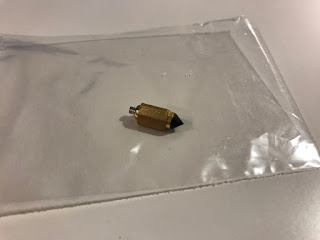