Not great, not terrible. 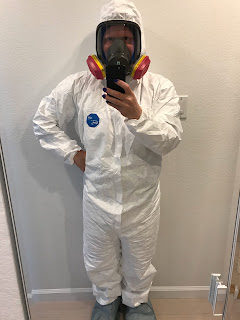 Went on a little adventure up in the attic to run the ethernet into the car hole so I could feed them into my security cameras. Went quite well, the tyvek suit was really nice. I'm glad I did it in the winter and not the summer though, as even with the cool air up there I still got a bit sweaty.

Since the door camera was already mounted up it was a pretty simple matter to just plug it in. 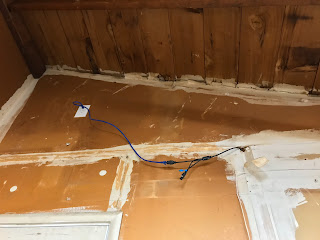 The second camera still needed installation though, so I painted up a block of wood to give me enough surface area under the eave to screw in the base and got it taken care of nicely. 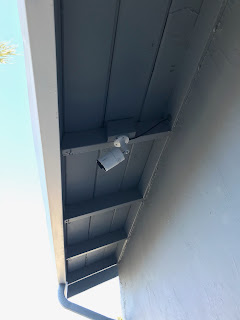 The view is maybe just a tiny bit low but easily covers everything I actually need to see. I didn't want to mount the camera too far down so that it wouldn't stick out and be too conspicuous/ugly/distracting. 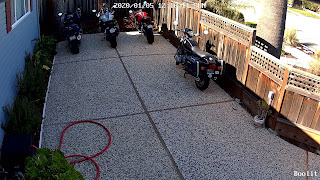 The hose in the lower left is usually wound up in the hose reel but I left it out last night because I was using the pressure washer to clean off the shelf boards I've been removing.

Speaking of those shelf boards, the last of the shelving on the house side of the car hole has been successfully removed, leaving only the section above the car hole door remaining. I decided that discarding the wood was both kind of a pain in the ass and also kind of wasteful so I've been, as mentioned above, pressure washing the crap off of it and saving it for scrap wood to use in projects later. We'll see if I come to regret this decision.
Posted by Nicoya at 12:43 PM