Not that long ago I bought a cheap set of spade bits. They came in a nice big blister pack that looks great on the shelf and lets you see all the sizes you'll get in the package. This blister pack was not great for storing them, though, as it was quite a bit larger than necessary and somewhat difficult to get the bits in and out of.

Given I have some old shelf boards laying around, I decided to put some of it to use as a reasonably nice bit holder for this set of bits.

I grabbed a short section from the pile and noticed it was split in a few places, so I snapped it the rest of the way through so I could get some glue in to it and assemble a reasonably sized piece of solid wood out of it. Once the glue dried I decided that actually that was a bit pointless as I have other pieces of shelf board that aren't split that I should use instead, and so swapped to using one of those.

I arranged the bits in a reasonable pattern, figured out some dimensions, and plowed out some wood with my router using the 3/8" bit I got a while back. I probably could have saved some space using a 1/4" bit but I didn't have one and it worked out fine in the end so whatever. I cleaned things up with a chisel and sawed the completed piece free from the board.

And it fell into two pieces, because it was split too.

Ok, glued it back together and did a bit more cleaning up with a chisel, softened the edges and smoothed the surface with some sandpaper, and... 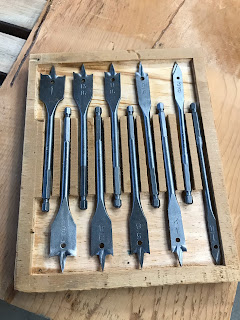 Well that ain't half bad. You might notice that the slot for the 9/16" bit went a little off course. Let's just say it wouldn't be a router project if I didn't at some point forget I was following a fence and end up a little ways into the weeds. It's fine though, it adds character.

Speaking of cleaning things up with the chisel, I did learn during this project how helpful it is to have a strop block on the bench while using one. Whenever I found myself trying to shove the blade uncooperatively through the wood fibers I just gave it a few quick rubs on the strop and next thing I knew the chisel was just slicing through the grain with no more force than mere gravity pulling it down. The fact that I needed to do that fairly regularly might say something about the quality of chisel I was using; if you told me they forgot to harden it at the factory I might not go to any great lengths to try to disprove that assertion, but it got the job done so whatever.

Speaking of getting the job done, a little more sanding and chisel-massaging later, plus a coat of wiping varnish, yielded quite a handsome end result if I do say so myself. 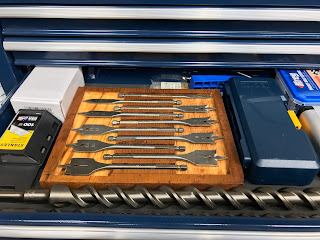 Not half bad for literal garbage wood. But if it was nicer wood it'd probably feel weird to use it to hold a cheap home-gamer set of stamped spade bits.

If I did this project over again I might made the dividers in the center a little shorter so that the bits overlapped a bit more, and save a bit of overall length. I was concerned that there might not be much meat left if I used a maximal overlap though, and this leaves a bit more room to get my fingers in and pluck out a bit when I need one.
Posted by Nicoya at 11:54 AM