So for a while it's sort of bothered me that the junction between the roof on my addition and the roof on my house wasn't technically ever properly closed up. It's one of those little odd corners that you don't really think about when you're putting a house together, and apparently the builders some dozens of years ago didn't think of it either.

I didn't take a "before" picture, but the short version is that the low sloped roof of the addition meets the original roof about 6 inches above where the original roof used to end. This isn't a problem on the west side as there's another section of roof it butts against, but on the east side it's just the side wall of the house that the roof overhangs. They built up the wall of the addition to meet the roof line, but failed to fill in the little triangular gap left where the new roof overlapped the old.

So first off I drove a few extra screws into the trim piece on the side, since it had warped a bit and pulled away at the bottom, then filled the screw holes with filler to keep it from collecting water. Then I measured and discovered that an old piece of plywood shelving happened to be the exact right width to fill the gap, and cut down a 6 inch piece to exactly fit the gap and screwed it into place.

Unfortunately it's nearly impossible to take a photograph of the underside of an eave on a house... 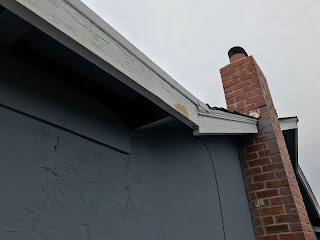 But luckily I was able to take a second shot that better showed the patch. 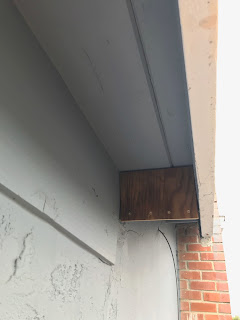 I still need to paint it and the spackle to match the original colors, and I'd also like to foam the remaining gaps with some not-so-Great Stuff, but I'm holding off on the latter because the cans are decidedly single-use, and I'm holding off on the former because it just started raining and will continue to rain until at least next week sometime.
Posted by Nicoya at 3:15 PM