Zero hour, 9am: The weather was looking cold and dry with a bit of wind so I layered up. Plan was to roll out my front door and make a quick hop over Harwood to Kennedy to start the day's business, then drop down Dogmeat and either bear north on Overgrown and deal with the mess of getting from the dam to the overpass, or keep going on Priest Rock and take the long way around Alma Bridge. Then I'd meet up with Charlie and whoever else was joining the fun for a fun blast up Montevina before dropping down Aquinas and slabbing home via LG-Almaden.

Gear for the day: Kestrel MXZ 29'er XC. 5 or so yards of spandex and chamois because I'm still a roadie even in the dirt. Windbreaker, thermal beanie, shoe covers, insulated gloves, not-as-insulated gloves, full-face helmet with camera, and a hydration pack stuffed with clif bars.

Harwood: This road is steep and annoying but relatively short. It's unfortunately close enough to my house that I don't really get a chance to warm up before hitting it, and so I ended up feeling kinda nauseated when I tried to push the pace a little. This feeling of unwell stuck with me across Santa Rosa and up Kennedy Road to the trailhead.

Kennedy: The misery seemed to basically fade once I hit the dirt and started grinding up the hill. There wasn't much traffic being a Monday morning, though probably more than most Mondays given that plenty of people do like I do and take the whole thing off. My pace was solid but nothing to write home about, and I still found myself having to stop periodically to give my back a rest (my lower back tends to get muscle fatigue during long efforts. I've been hitting the weights to try to get it to stop being a bitch but it's a work in progress. Getting off the bike for 2-3 minutes clears up the fatigue and I can press on again for a while so ¯\_(ツ)_/¯).

Made it up to the helipad for a brief snack break and photo op, without any major incidents along the way (save for the occasional trail user asking if I was dying whenever I was letting my back rest up). 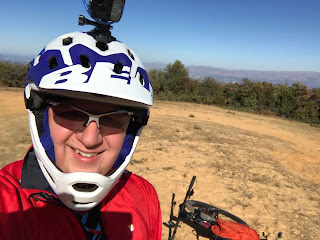 Next up was the steep bits of Kennedy, and while I made it up the first section, the second section found me suffering my usual fate of simultaneously wheelieing while spinning out my back tire. Had to push up that section, as I always do.

Priest Rock: I decided about there that I would go straight down Priest Rock and do the Alma Bridge option, so I dropped in and was greeted by some freshly graded fire road. Dogmeat has apparently become much less meat and much more dog (or maybe that's the other way around). The surface is smooth and dusty now, and they added in some water bars that will yeet you the fuck into orbit if you hit them at speed. I did not hit them at speed.

I did, however, take a minute to snap a picture of Charlie at work: 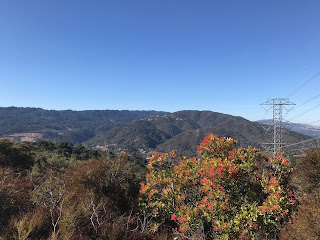 He's in there somewhere, just zoom and enhance a few times.

I always get weirded out towards the bottom of Priest Rock. The trail looks like it's wrapping up, but then you look to your right and you're 500 feet up a frighteningly steep slope with miles of trail left to go before you actually make it to the road.

Alma Bridge: I really hate riding around the southern part of Lexington reservoir. It's always way longer than I remember and the rolling elevation profile makes it a pain in the ass to actually get into a proper pedalling rhythm. I really should have opted for the bushwhacking route over the dam. Stopped for a snack along Old Santa Cruz and people asked me if I was dying again. I was tempted to say yes.

I finally crossed over 17 and met up with Charlie just as he was rolling in from a descent. Perfect timing. Luke and Josh followed maybe 30 seconds behind and we all hung out and snacked and chatted before heading up the hill.

Montevina: Charlie and the boys looped down the road a little bit to grab the start of the segment, and I opted to just go straight up as I wanted to have a decent chance of holding on to the group for a few minutes. It didn't take long for them to catch up, and after a few more minutes Luke and Josh pulled ahead a bit while Charlie hung back with me.

I basically redlined for 15 solid minutes:

Don't ask me for the physiological explanation of how my heart is still beating after that, I couldn't tell you. I eventually had to stop and give my back a rest again, and I honestly have no idea how much further I could have gone at ~max HR if my back hadn't been the weakest link.

Charlie took off after I stopped, as was the sensible thing for him to do, and after my back felt suitably refreshed I resumed climbing at a more leisurely/sensible pace.

After a few more back-stops I finally got to the familiar point in any long ride: that point where I finally out-pedal my ability to shove clif bars down my throat. I started taking a few more breaks, including a good 5 minute stop off to have a conversation with an emu. That's not a euphemism for anything there's literally an emu that lives in one of the yards up there. Or maybe my blood sugar had dropped enough for me to hallucinate it. I also made a slightly daft decision to remove my shoe covers at this point, as they were a bit on the soggy side, right before entering a much shadier and windier section of Montevina. Lesson learned: don't do that.

I finally struggled my way to the gate at the top of Montevina and parked my butt on the log trap thing just two minutes before another cyclist came down from the top of El Sereno and needed to pass. Son of a... He turned out to be a 70yo fellow who had recently resumed cycling after taking a hiatus for a few years, and as per usual it was a good reminder of why I was out there: so I could still be out there when I'm 70 too instead of rotting away in an old folks home.

Aquinas trail was quite lovely and had some great views, and was interrupted only by a brief teleportation across private property:

Navigating my way from the end of Aquinas down into more familiar sections of Los Gatos was an interesting adventure, but thankfully the strategy of "point my bike in the most downhill direction and pray" seemed to work out ok. The descent gave me a little bit of a second wind and the last stretch home through LG-Almaden went easier than I expected.

All in all I managed to lose 3lb over the course of the day (185lb to 182lb) despite draining my 3l hydration pack. Strava claims I burned through over 3000 calories and I'm feeling every single one of them. I'm currently working on drinking my weight in gatorade over the next day or two to try to recover in time to hopefully take a stab at On Orbit on Friday. Here's hoping!
Posted by Nicoya at 2:59 PM