It's so fluffy I'm gonna die 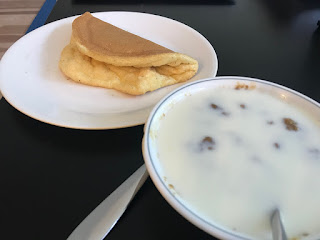 I had got some eggs to experiment with tossing them in the rice cooker at the end of its cycle while the rice was still piping hot. It worked ok the first time I tried it when I actually woke up in time to get the egg in right away, but the second time I slept in a while and the "keep warm" temperature wasn't really hot enough to cook the egg to my liking.

I still had 6 eggs to go through though, so today I decided to try making a soufflé omelette to go along with my usual oatmeal instead. It turned out pretty well and wasn't all that hard to make. It's peculiar to eat though, because it's fluffy and browned and looks like a pancake, but when you eat it it tastes savoury like an omelette.
Posted by Nicoya at 10:30 AM