Due to "reasons" I had a few more LED shop lights kicking around than I originally planned on installing. I was thinking of keeping them around until I rebuild the hantavirus shed, but that project is a ways off yet so I figured I'd put them to use now and buy more lights later when I need them.

The back half of the car hole was pretty well taken care of with the existing lights, but the front half was pretty moody in comparison. Not anymore! 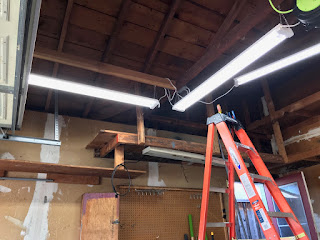 I used a mysterious 2x4 that was left in the rafters to bridge the gap to hang the leftmost light. For the sake of practicing with it, I used the Kreg pocket hole jig I bought a while back to make screw holes to join the 2x4 to the existing framing. It worked quite well and I learned some things about using it.

I installed another outlet at the far end here, just on the other side of where the new 2x4 joins, wired to the duplex pair of outlets I installed earlier towards the middle of that beam to replace the single lightbulb fixture stuffed with a 3-way 2-prong adapter, itself stuffed with 3-prong adapters.

The wiring was pretty straightforward all the way up to the moment I switched the power back on and heard a lovely pop. Turns out that somehow I'd managed to get the hot wire on the new outlet pinched between the outlet screw and the romex clamp. Oops. Couldn't do that again if I tried. Bit of electrical tape to fix the pinch and got the wires packed a bit better and everything worked second try. Huzzah!

There's one more outlet box I need to wire in to light up the mirrored twin of this one on the other side of the garage, but that'll wait until tomorrow at the earliest.

I also took the opportunity to swap out some of the cream colored outlets elsewhere in the house with white ones to match both the walls and the faceplates that were installed. I really don't know why people mismatch these things, it's not hard to get the right colors! I figure nobody will notice the cream ones up in the rafters here.
Posted by Nicoya at 7:40 PM