Since the weather this morning was quite pleasant, I decided to take some time after my morning grocery shopping to finish up a few odds and ends under the hood on the PedoVan. Mostly I wanted to replace the heat shrink on that one wire I had noticed last time, where its original heat shrink had split and fallen off.

A quick 5 minute job: slide under the van, pull the cable, heat shrink it, bolt it back in place.

But then I decided that since I was out there, I'd clean up some of the wiring up top.

First off, I added some heat shrink over the ring terminal on the charging cable for the auxiliary battery. 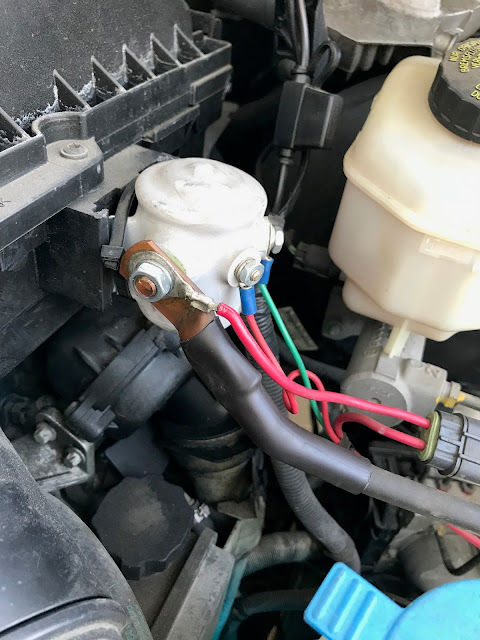 Remember this photo, we're gonna come back to it later.

Then I replaced the positive and negative terminal clamps on the aux battery cables. 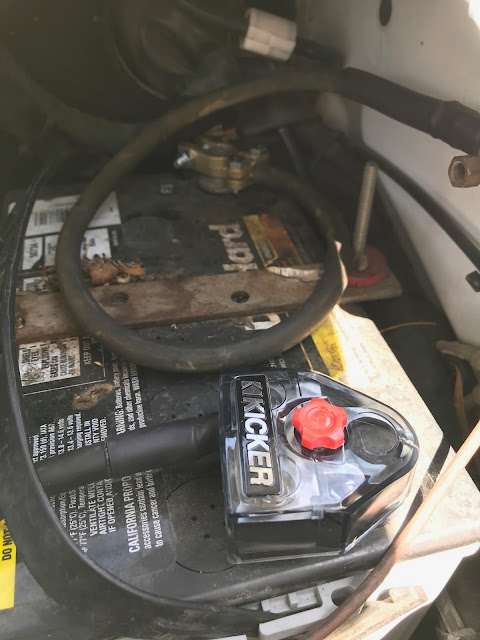 This was partly to get a 2-connector clamp on the positive for a later project, and partly because the old ones looked like this. 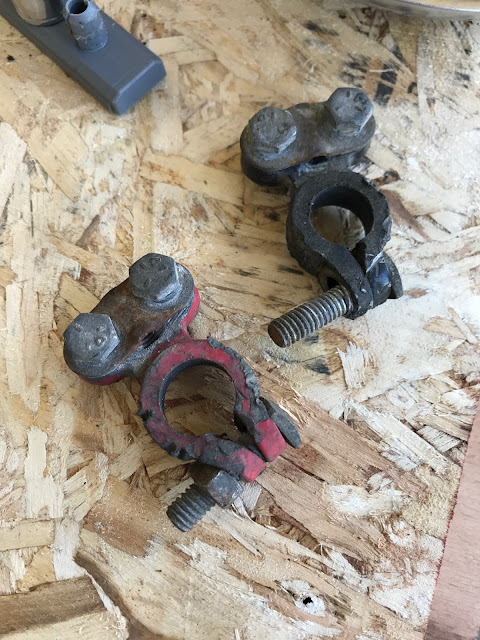 I will never understand why they make these out of lead.

Anyway, I buttoned it all up and went back in the cab to set the time on the diesel heater controller, only to find that it wasn't powered on.

Doing a little investigation, it turned out that the huge, thick ground cable for the aux battery had no electrical connection between one end and the other. Somehow. I puzzled over this for a bit, poking and prodding at it, before realizing that the ring terminal had been installed incorrectly way back when it was originally put in.

For those of you following along at home, here's how to make three mistakes in a row:

Some people reading this list will be sighing and shaking their heads. For everyone else, here's the answer sheet:Now I didn't really have the option to start over from scratch on these cables, so I did the next best thing and got out my hydraulic cable hex crimper to at least put a proper crimp on the ring terminal. After applying some heat shrink over it, it came out looking pretty darn good. 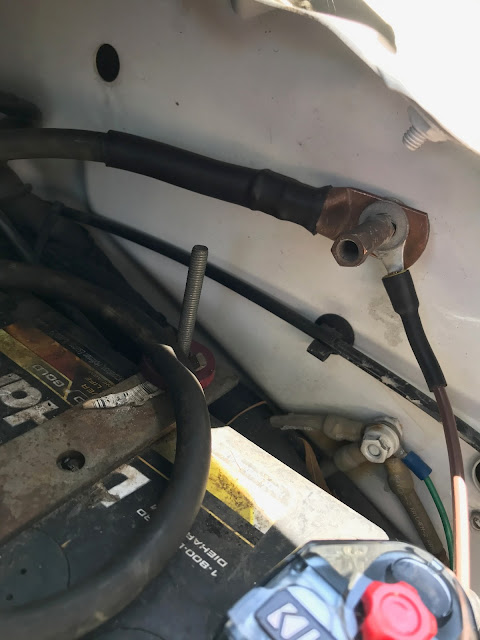 Nice solid connection, no half-loose wire jiggling around inside, and a perfect zero ohms resistance on the multimeter.

But the diesel heater controller still wasn't powered on.

Remember that photo up near the top, the one I said to put a little mental bookmark on? The photo of the welding cable crimped into a ring connector in a method eerily similar to the one that had just failed? 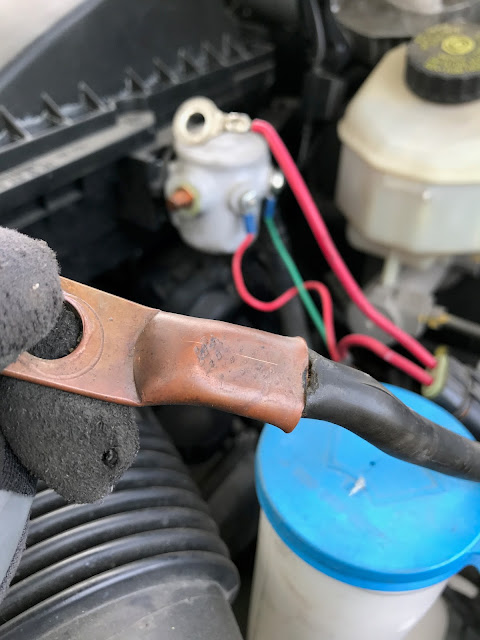 Here's a little rule of thumb: if you're putting on a ring terminal like that, and the tool you're using doesn't look like this, then you're probably doing it wrong. 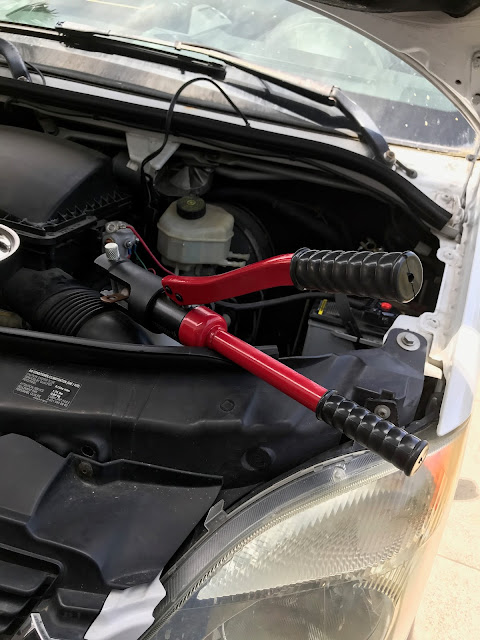 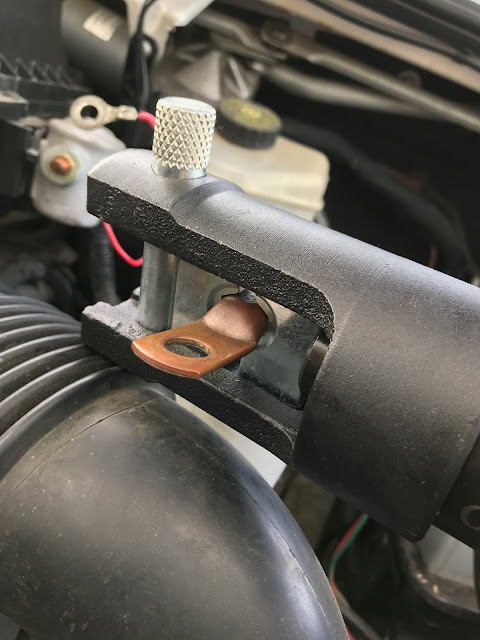 See, this is what a crimped connection is supposed to look like. 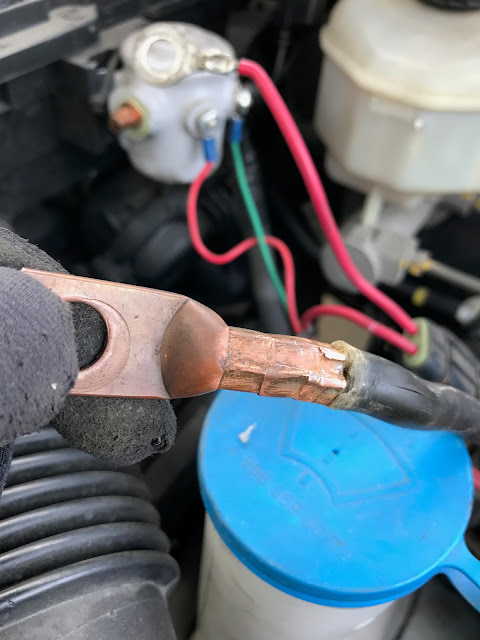 Anyway, I put a fresh layer of heat shrink on it, bolted everything back in place, and finally it was all working properly.