So with the winter rains comes the usual crop of weeds. The yarrow is doing a decent job of keeping the dirt behind the retaining wall looking reasonably nice, but down in the flower bed it was mostly unwelcome things sprouting up.

With this in mind, and seeing as the soil in the flower bed is kind of garbage, I decided that it's time to plant some fracking radishes. 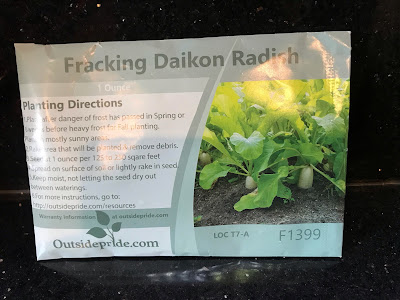 Daikon radishes are a good plant to start off a patch of dirt with (or to refresh a previously planted patch) because the taproot is incredibly invasive and will break up compacted soil, and if you leave them to die off and rot then that taproot becomes decaying organic matter that brings a bunch of nitrogen and other nutrients to the party.

They're also tasty, if you want to go to the trouble of digging them up once they're grown. The leaves are likewise edible if you're into that sort of thing.

So, into the dirt they go. This is the before picture. 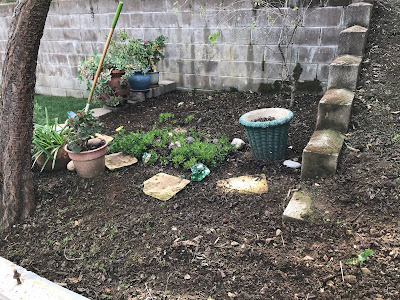 For the after picture, just imagine the exact same thing except raked again. They're seeds, this isn't an instant gratification type of thing. Once they do sprout I'll be sure to post updates here, so stay tuned.

Oh, also I moved the blue pot out of the way. I guess that's slightly more than nothing. Whatever, just imagine it gone.